The Irish citizens are now awaiting a flight home to Ireland 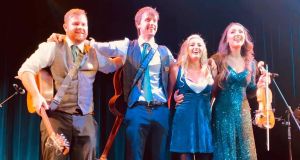 Irish trad band Emerald Tide who were stranded on board the Ruby Princess cruise ship in Australia. Photograph: Facebook

A group of Irish musicians stranded on board a cruise ship in New South Wales, Australia, have finally been allowed to disembark after more than a month of quarantine in their cabins.

The four Emerald Tide musicians – alongside another Irishman who was an engineer on board the ship – are among some 59 international crew members who were allowed to leave the Ruby Princess cruise ship on Tuesday morning following extensive checks and screening.

The ship made international headlines in March when it docked in Sydney and allowed its 2,700 passengers to disembark despite some people on board showing coronavirus symptoms. This has been linked to hundreds of Covid-19 cases and more than a dozen deaths in Australia.

Following this, more than 1,000 crew members were forced to remain onboard quarantining in their respective cabins, with many of them having tested positive for the virus.

Killian Shannon, one of the members of the band, said they are now in a hotel where they are continuing to quarantine until they can get a flight home.

“We hadn’t seen sun in days. We hadn’t seen the outside of the ship in God knows how long. We were all absolutely elated. The first thing we did was get on to the phone to our loved ones. We’re hoping to get home as soon as possible now,” he said.

“When we were leaving the ship, there were army and police and we had to go through a sanitisation so kind of a bath to clean off our soles and then everything was sanitised before we were allowed to get on the bus. Everyone who was cleared to leave, was cleared to be Covid-free as well. They were taking no chances.”

Shannon spent 32 days in his cabin isolating by himself, which he described as a long and difficult period of time.

“It was very stressful, just being in there and having a bit too much time with your thoughts. ” he added.

Shannon had tested positive for the virus half-way during the quarantine period, but he was retested before disembarking and now holds a certificate stating he is negative for Covid-19.

“The symptoms I felt were mild. In my case, I lost my sense of smell and I had a bit of a scratchy throat so it didn’t get any worse there. I knew I was going to be fine,” he said.

“It was scary being away from home. You feel kind of helpless because what if someone gets ill at the other side of the world and we’re stuck here. We built a support system for each other. We were sending each other encouraging messages. We kind of created a family for ourselves because we were away from our actual families.”

Shannon and his band said they really wanted to thank the cruise ship owners and the Irish Department of Foreign Affairs for all their help and support in getting them home.

Man (27) arrested in relation to murder of Lyra McKee 10:35
Taoiseach dramatically sacks Barry Cowen as minister over drink-driving controversy 10:31
Cowen ‘surprised and disappointed’ after being sacked on the phone by Micheál Martin 10:02
Dry spells and sunshine on St Swithin’s Day - will it last for 40 days and 40 nights? 09:33
Covid-19: Overseas visitors are causing ‘stress and anxiety’ in some areas, TDs say 05:10