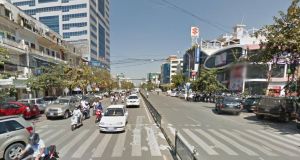 An Irish man died in an accident in the Cambodian capital on Sunday.

Tomas Beecher is believed to have died after he was struck by an SUV in the capital city of Phnom Penh.

According to local media reports Mr Beecher was hit by an SUV driven by a 20-year-old girl and died at the scene.

The deputy municipal traffic police chief said the Range Rover was owned by a police officer whose daughter was driving passengers from a party when the vehicle struck the Mr Beecher, reports the local media.

The Department of Foreign Affairs is providing consular assistance to the family. The circumstances of his death are not yet confirmed.

It is believed Tomas Beecher had been living in the Chamkar Mon district of the capital for the past 6 months. Before this, he spent two years living and teaching in South Korea, according to local media.

Ireland does not have an embassy or consulate in Cambodia. There is an Irish embassy in Hanoi, the capital of neighbouring Vietnam.

The country which borders Thailand, Vietnam and Laos and has a population of more than 14m and receives more than 2 million tourists per year. Among its most visited sites is Angkor Wat, a 12th century temple monument.