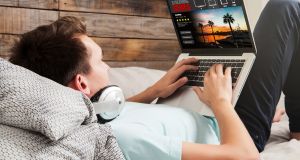 The successful court action which will block three illegal film sites will send out the message that piracy is not a victimless crime, the movie industry has said.

The industry has lobbied hard to combat piracy which it estimates costs the exchequer €71 million in tax revenues every year.

The case at the Commercial Court was taken against three of the worst offenders, Prime Wire, Watchseries and Movie4K, which between them had 3.4 million visits from websites in the Republic of Ireland in October last year alone.

The trust is the film and television industry’s consumer education body which runs the website lovemovies.ie.

Mr Burke said piracy was partially responsible for the collapse in home entertainment sales of 87.6 per cent between 2007 and 2016 and the loss of 500 jobs in the video and DVD rental sector in that timeframe.

He acknowledged that the movie industry needs to do more to make films available on different digital platforms. “The solution hasn’t presented itself fully yet. There have been attempts to introduce day and date releasing (releasing films simultaneously in the cinema and on digital platforms),” he said.

“It is something that is being heard. There are various conversations taking place within the US about this.”

“Allowing piracy to continue unchecked will inevitably lead to a sustained drop in the quality of available content created here, damage the Irish economy and result in the loss of more Irish jobs.”

He said the industry can only thrive in Ireland if piracy is prevented. Element provides its own online video demand platform, volta.ie, which offers a selection of Irish and international films.

The case was taken by the Motion Picture Association which represents Hollywood’s six biggest studios. It was supported by the Irish Film Board and Ibec’s Audiovisual Federation.

Its Europe, Middle East and Asia president Stan McCoy said the Irish case was part of an international campaign against piracy which he described as a “borderless issue”.

“The creative community worldwide must work together to solve it,” said Mr McCoy. “Stopping theft and creating space for ever more legal offerings will help to cement the future of Ireland’s thriving film sector. This ruling is the first step towards that.”