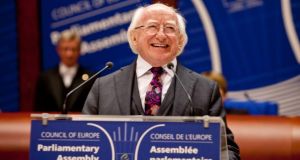 President Michael D Higgins at the Council of Europe in Strasbourg on Tuesday where he delivered his address ‘The Future of Parliaments: Addressing the Challenges’. Photograph: Chris Bellew/Fennell Photography.

Ireland should not be taken as a model for other countries struggling to overcome economic crisis, President Michael D Higgins said repeatedly on Tuesday during a day-long visit to the 47-member Council of Europe and the European Court of Human Rights.

“I don’t think the Irish Government is seeking to give lectures to members of the EU or the Council of Europe,” Mr Higgins replied to a correspondent from the Chinese news agency Xinhua who noted that Ireland now has the highest economic growth in the euro zone.

In the question-and-answer session following Mr Higgins’s address to the Parliamentary Assembly, a Turkish representative asked what was the secret to Ireland’s success.

“This adjustment has taken place with a huge sacrifice by the people of Ireland,” Mr Higgins replied, reiterating his allusion to the “narrow version of fiscal orthodoxy” that “seems predicated on a de-peopled economy.”

The Irish economy “is not a driverless car. It has citizens abroad who paid a very high price,” the President continued. “It is not appropriate to use Ireland as some kind of exemplar.”

Sunday’s election in Greece brought the far left anti-austerity Syriza party to power. Though he never mentioned Greece by name, it was writ large in Mr Higgins’s speech.

He called on parliaments “to muscle themselves into this debate, and to take it back from what I regard as unaccountable sources”. It was, he added, “a view that I share with Pope Francis”.

Mr Higgins’s visit was almost sidelined by an emotional debate at the Parliamentary Assembly over the continued suspension of Russia’s participation in the Council of Europe because of its annexation of Crimea.

Anti-Russian protesters are encamped across the street from the council’s headquarters.

In his speech to the assembly, Mr Higgins called the war in eastern Ukraine “the disquieting return to our continent of grave geopolitical fractures, carrying disastrous human consequences”.

The Islamist attacks that killed 17 people in Paris earlier this month were another recurring theme. Like the war in eastern Ukraine, “new forms of fanaticism and conflict” pose “a profound challenge to democracy and social cohesion”, Mr Higgins said.

These new forms of violence “arise at the obscure intersection of global geopolitical tensions, individual trajectories and beliefs, and complex structures of social inequalities”, he continued.

In response to a question from Joe O’Reilly TD, a member of Ireland’s delegation to the Strasbourg Assembly, Mr Higgins said European countries “have neglected conversations with those who advance faith systems based on fundamental texts”.

“We have created a kind of void into which those who would exploit [youths] have moved like predators… We must be able to look at a stranger as someone with whom we share vulnerabilities - not as an aggressor.”

Despite the care taken by Mr Higgins to avoid political controversy, it was a highly political speech, if one read between the lines.

In a veiled reference to dissatisfaction in the UK with the Council of Europe and the European Court of Human Rights (ECHR), which is part of it, the President expressed his “disquiet” at what he called “endeavours under way in some quarters that risk undermining the very legitimacy of both the court and the Convention on Human Rights”.

It was, for Ireland, “a very serious matter for concern”, Mr Higgins continued. “The European Convention on Human Rights must remain the cornerstone of human rights protection in Europe.”

Membership in the council and Ireland’s implementation of the European Convention on Human Rights “have been fundamental in consolidating the rule of law and supporting positive social change in Ireland,” Mr Higgins said.

Michael O’Boyle is the second-ranking lawyer at the ECHR, which employs 700 people and accepted its one millionth application last month. “This court has the most developed case law regarding human rights anywhere in the world,” Mr O’Boyle said after taking Mr Higgins on a tour of the court.

Ireland pays to have the proceedings of the ECHR webcasted on the internet, “an archive of hearings that plays a big part in law schools throughout the world”, Mr O’Boyle said.

“Ireland has always taken this court very seriously… There is absolutely no question mark regarding Ireland’s respect for this court.”