Singer could have been a huge star internationally, says friend Fr Brian Darcy 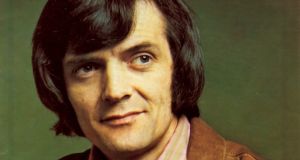 Brian Coll made his name as a solo singer and as the frontman of such well-known Irish showbands as the Plattermen and the Buckaroos.

The death has occurred of Brian Coll, a stalwart of the Irish country music scene for the last 60 years.

Coll (79) died from a heart attack at his home in Omagh, Co Tyrone, on Saturday. He had been diagnosed with cancer earlier in the year.

Coll made his name as a solo singer and as the frontman of such well-known Irish showbands as the Plattermen and the Buckaroos. He died just a month after his former bandmate Pio McCann.

Coll could have been a world star of country music, but chose to base himself in Ireland for family reasons, according to his good friend Fr Brian D’Arcy.

Fr D’Arcy said Charley Pride’s manager had told Coll in 1972 at a meeting in Nashville he would be “America’s new Slim Whitman” if he stayed.

“He said, ‘If you stay here for six months you’ll be a massive star, but you won’t make much money at the start’,” Fr D’Arcy told Shannonside’s Joe Finnegan Show.

“He had family at home. What his life would have been had he moved there, I don’t know. Brian lived his own life and was happy in his own way of doing things.

“He was always a young fellow who was the leader of the gang. He was a very fine singer. He was an extremely great technical singer.”

Fellow country singer and former bandmate Declan Nerney said “only a quarter of the talent that he had got out there into the world”.

Nerney explained: “There was a whole wealth of talent in that man that never got out and never got to the forefront of where it should have been. He could have been far bigger in the UK and Europe. He shied away from publicity.

“He gave ordinary people a hearing and a great ear. He could give them advice. They would go away a lot happier. It was as if he was a doctor. He was a mighty man in that respect.”

Nevertheless, Charley Pride remained a keen supporter of Coll and would ask him to open up for him on his Irish tours. He also shared a stage with Whitman.

Coll began his singing career as a child in Master O’Sullivan’s school choir in the Town Hall in Omagh when he was nine.

He played in his first band in 1960 and was in various groups during the decade before his career took off.

“ I never thought I would have got out of Omagh singing, never mind playing in places like Carnegie Hall,” he told the Ulster Herald five years ago.

“No one played with more international American stars than me. I was fortunate that Jim Aiken the promoter always picked me to open the show for all these huge names when he brought them over.

“That was a great boost to my own career here. Most music should be happy and hopefully I have brought a lot of happiness to many people and those who have supported me over the past five decades and more.”

Many tributes were paid to him. Irish country singer Mike Denver tweeted: “RIP Brian Coll. One of the greats. I had the great privilege of touring with Brian a few years back. A pure gentleman.”

Coll was also a keen motorbike racing fan and a friend of the late Joey Dunlop. He is survived by his wife Helen and his five children.

His funeral takes place on Tuesday at 2pm in the Sacred Heart Church in Omagh with burial afterwards in St Mary’s cemetery in Drumragh. The funeral Mass will be broadcast at the Drumragh Parish Webcam – http://www.drumraghparish.com/webcam.html