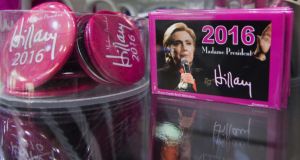 Irish supporters of Democratic presidential candidate Hillary Clinton are hosting an event in Dublin on Saturday to coincide with a set-piece speech in New York City billed as her first campaign rally.

Irish Democrats, a group led by New York lawyer Brian O’Dwyer, a prominent figure in the Irish-American community, will host the curtain-raiser party at the home of Brian Farren, a barrister and US citizen, and his wife Linda O’Shea Farren in Ballsbridge.

The event is not a fundraiser, an Irish spokesman for the group said, but aimed at marking the official start of Mrs Clinton’s second bid for the White House on the same day she launches her campaign with a speech at Roosevelt Island in New York.

About 50 guests are expected to attend the breakfast at the home of the Farrens who have previously hosted fundraisers for Mrs Clinton. The spokesman for the group said that members of the Government and the Irish judiciary had been invited to attend.

The couple hosted a fundraiser at their home in August 2014 raising up to $5,000 from each of the attendees to go towards Ready for Hillary, the campaign group known as a super political action committee or Super PAC, that can raise millions of dollars to help a political candidate.

Mr O’Dwyer, a long-time supporter of Mrs Clinton, organised that fundraiser as a member of the group’s national finance committee.

They also helped raise money for Mrs Clinton’s first presidential campaign in the 2008 election when they hosted an event in November 2007 that was attended by former president Bill Clinton.

Beaten by Barack Obama in the 2008 election, Mrs Clinton is the clear frontrunner for the Democratic presidential nomination in 2016, polling well ahead of three other candidates: Vermont senator Bernie Sanders, former Maryland governor, Irish-American Martin O’Malley and Lincoln Chafee, the former governor of Rhode Island.