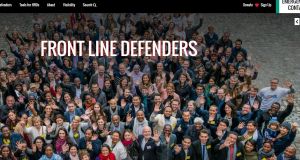 A screengrab from the Front Line Defenders website. The charity has won a UN prize.

An Irish charity that protects human rights workers worldwide has been named as one of the winners of the 2018 United Nations Human Rights Prize.

Front Line Defenders was founded in 2001 by Mary Lawlor, the former director of the Irish branch of Amnesty International. It supports human rights workers by providing training, grants and security advice, especially for those working in countries with a history of repression. The chairman of the organisation’s board is businessman Denis O’Brien.

Each year it supports 4,000 human rights defenders around the world, the organisation said.

It was announced as one of the winners of the 2018 prize on Thursday by the President of the UN General Assembly, Maria Fernanda Espinosa.

This is the tenth award of the prize since it was established in 1968, coinciding this year with the 70th anniversary of the Universal Declaration of Human Rights.

“We are hugely honoured to receive this prize,” said the organisation’s Executive Director Andrew Anderson. “As we approach the 20th anniversary of the UN Declaration on Human Rights Defenders, we must redouble our efforts to protect those who risk their lives in the pursuit of justice and dignity. This recognition will help Front Line Defenders bring attention to the important work human rights defenders undertake at great personal risk.”

It dedicated the award to human rights workers around the world “who struggle every day to advance and defend the rights for their communities”.

Minister for Foreign Affairs Simon Coveney said yesterday he was “proud to see Front Line Defenders honoured as they work to protect human rights defenders in the most dangerous & challenging parts of the world”.