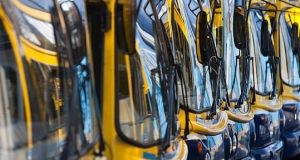 Dún Laoghaire-Rathdown County Council has said it has a ‘major concern’ with the BusConnects proposals. File photograph: Getty Images

Dún Laoghaire-Rathdown County Council has expressed major concerns about plans to reform Dublin's bus services, which would see many passengers having to change buses to travel into the city centre.

In its submission to the National Transport Authority (NTA), the council said a requirement to change buses en route “has significant negative impact on bus passengers”.

“It adds inconvenience, insecurity and uncertainty,” the submission said. The council said the BusConnects project “assumes that a requirement to interchange has no negative impact”.

“This is not correct, especially for the elderly, those with mobility impairments and disabilities, and children. Also, the proposed route changes are scheduled to be in place before the infrastructure improvements along the 16 core bus corridors. Without the improved infrastructure bus journey times will be unreliable and interchange will be less attractive,” it said.

The council’s submission was prepared by its own officials. However, Dublin City Council and Fingal County Council did not take up the opportunity to make a submission to the NTA.

Some 30,000 submissions were received by the NTA in relation to the redesign of Dublin’s bus network when public consultation closed at the end of last month. A revised network is due to be published by mid-2019, and a further round of public consultation will begin. The new network is expected to be rolled out by early 2020.

Aside from a redesign of the network, the BusConnects project also involves upgrading 16 core bus routes and cycle lanes into the city.

Property owners who may lose part of their front gardens will be notified from next month, and a separate public consultation process will run until the middle of 2019.

Construction of new lanes would not begin until 2021, and pending approval from An Bord Pleanála. The NTA said the network redesign can be implemented using the current road network with “some upgrades to infrastructure at key interchange locations”.

“These can be done in advance of the rest of the bus lanes and cycle lanes being built,” a spokeswoman said.

The council said it welcomed the primary objective of BusConnects “to make the bus system more useful to more people”, and elements including a new ticketing system, transitioning to a new fleet of low-emission vehicles and a network of cycle facilities.

However, it said a reliance on interchange in the design of the proposed network “seems to have led to a situation where current direct services become unnecessarily disjointed”.

“This will make it difficult or impossible to provide fast and reliable times for orbital buses.”

South Dublin County Council said it broadly welcomed the measures set out in the BusConnects project, in particular a high frequency spinal route connecting Lucan to the city centre and additional services to Adamstown.

It also welcomed the provision of orbital routes, stating that one of the deficiencies associated with the existing network was the dependency on travelling through the city centre “resulting in longer journey times or in public transport not being an attractive or feasible option to travellers”.

Radial bus routes would be supplemented by frequent orbital services, enabling passengers to switch from one bus to another at no extra charge.

The plan acknowledges some bus users who currently have a direct route into the city centre from where they live would have to change buses to reach their destination.However, it says journey times will be significantly shorter.