Ireland in line to get 4.47m Covid-19 vaccine doses by end of June

Legislation required before mandatory hotel quarantine for travellers can be enforced 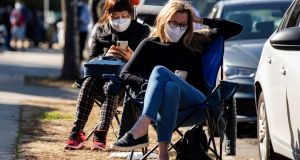 “Vaccine Hunters”: People wait in line for hours for a chance to get vaccinated against Covid-19 outside the Kedren Community Health Center in Los Angeles, California, on Tuesday. Photograph: Etienne Laurent/EPA

Nearly half of the population of Ireland could be in line to receive a Covid-19 vaccine by the end of June, according to a new European delivery schedule.

Under the plan, the Republic of Ireland would be in line to receive around 4.47 million doses by the end of June, reflecting its population of about 1.1 per cent of the overall EU.

The European Commission (EC) expects 33 million doses of overall Covid-19 vaccines to be delivered this month, 55 million doses in March, and 300 million between April and June.

In all, 18.5 million doses of vaccines were delivered in January and shared among the 27 member states, 17.6 million of them Pfizer-BioNTech doses and the remainder made by Moderna, according to EC figures.

All are made available to member states depending on population size, meaning that if Ireland opts to take all of its available doses it would be in line to have received about 4.47 million doses by the end of June.

The number of people who can be vaccinated by the deliveries depends on how many of the doses are of two-shot vaccines, and how many are of the single-shot vaccine currently under development by Johnson & Johnson.

So far, only Pfizer, Moderna and AstraZeneca have applied for and received authorisation from the European Medicines Agency. Johnson & Johnson has indicated it hopes to be in a position to apply for approval this month.

A further 101 deaths of Covid-19 patients were reported by the National Public Health Emergency Team on Tuesday, the highest daily figure reported during the pandemic. The deaths included that of a 19-year-old, one of the youngest victims of Covid-19. There have now been 3,418 Covid-19 deaths in total in the Republic.

The figures come as clarity is awaited over the precise role AstraZeneca will play in the Irish vaccination programme. The National Immunisation Advisory Council (NIAC) wrote to the chief medical officer Dr Tony Holohan on Monday with its advice on the shot.

It is thought it advised that while the AstraZeneca vaccine is safe and effective to use and is an option for the over-70s, mRNA-based vaccines such as Moderna and Pfizer should be given to older cohorts whenever it is practical and timely. Sources said the advice is that AstraZeneca should be given if others are not available, with the most important factor being that people are vaccinated in some form.

A growing number of European countries have recommended limiting use of the AstraZeneca jab in older people, including Germany, Poland, Italy, Sweden and France. The trials for the AstraZeneca shot included a relatively small number of over 55s, although it has been approved for use in all adults by the EMA.

Meanwhile mandatory hotel quarantine for incoming travellers without a negative Covid test or from Brazil and South Africa, announced by the Government last week, is “a matter of weeks” away, ministers were told yesterday.

The Cabinet has been told that legislation must be passed through the Houses of the Oireachtas before travellers from certain countries, such as Brazil and South Africa, can be required by law to spend 14 days in a hotel, a process that the Government hopes to have concluded within weeks.

The move was announced last week by the Taoiseach Micheál Martin as part of the extension of the lockdown and the tightening of pandemic restrictions. Legal advice to the Government now suggests that legislation will be needed, meaning a delay of possibly several weeks.