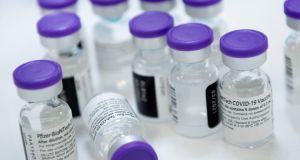 Pfizer expects about €12.5 billion in revenue this year from its Covid-19 vaccine and has raised its 2021 profit guidance on hopes that having one of the first and most effective vaccines will boost its prospects. Photograph: Brendan Smialowski/AFP via Getty Images

Pfizer expects about $15 billion (€12.5 billion) in revenue this year from its Covid-19 vaccine developed with BioNTech and has raised its 2021 profit guidance on hopes that having one of the first and most effective vaccines will boost its prospects.

The US drugmaker revealed its expectations for vaccine sales for the first time on Tuesday and said the number could rise as it signs more contracts.

Pfizer forecasts the profit margin as a percentage of revenue for the Covid-19 vaccine will be in the high 20s. Based on the group’s adjusted income before tax from the jab, this could top $4 billion.

This margin could increase after the pandemic ends, with the price of the vaccine rising and costs coming down. Costs and profits are split 50/50 with BioNTech.

Albert Bourla, Pfizer’s chief executive, said it was an “increasingly probable scenario” that people will require boosters, or different vaccine formulations to keep up with new variants of the virus. This would result in a “durable” revenue stream, he added.

“If that was an open market, which means that the physicians and citizens they have the ability to choose which vaccine they will receive, I feel very comfortable that we will have the lion’s market share,” he said.

The BioNTech/Pfizer vaccine has shown the highest efficacy rate, at 95 per cent.

Mr Bourla also added that Pfizer had increased its sales estimates for its vaccine after recent news about rivals J&J, which reported a lower efficacy rate at 66 per cent, and AstraZeneca, for the way the latter is “perceived in Europe”.

A commission advising the German government recently said the Oxford/AstraZeneca vaccine should not be used in over-65s, even though the European regulator has approved it for that age group. A French panel on Tuesday made the same recommendation.

Shares in Pfizer, which are trading roughly where they were before the pandemic, fell 3 per cent to $34.88. Mr Bourla said he did not think the company’s stock was receiving enough “credit” for its underlying business or for the prospects of the Covid-19 vaccine.

Covid-19 vaccine makers have been split over whether to make a profit on the product. Oxford/AstraZeneca and Johnson & Johnson have said they will be not-for-profit for the duration of the pandemic, while BioNTech/Pfizer and Moderna have a for-profit model. – Copyright The Financial Times Limited 2021