Arklow plan could be delivered by 2025, helping to reach climate plan’s 1GW target of offshore wind in same year 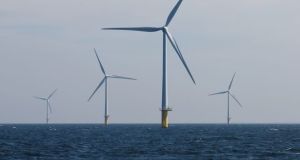 Plans to increase offshore wind energy targets in the programme for government from 3.5GW to 5GW have been welcomed by the industry.

The 5GW target, the energy equivalent of power for about 5 million homes, is to be phased in by 2030, with the first auction of quota to potential developers by next year.

SSE Renewables which last week announced its intention to invest up to €2 billion on Phase 2 of the existing Arklow Bank windfarm off the Co Wicklow coast, said the move “provides investor certainty and supply chain confidence for projects such as the 520MW Arklow Bank Phase Two”.

It added that its plans for Arklow could be delivered by 2025, helping to reach the Climate Action Plan’s 1GW target of offshore wind in the same year and resulting in a 1 per cent reduction in annual carbon emissions.”

Expansion plans for Arklow Bank envisage up to 100 additional turbines on the site, about 13 km off the coast, south of the popular Brittas Bay.

When commissioned in 2004, the seven-turbine Phase One of Arklow Bank was the first offshore wind farm in Ireland, and the world’s first array of wind turbines rated over 3 MW each. It currently generates 25MW of electricity for the national grid and is owned by GE Wind.

The new turbines to be added by SSE Renewables would be located between seven and 13 km offshore and would have capacity to power about half a million homes.

Seven other wind farms - with a combined capacity of up to 3,480MW - have been designated by Minister for Communications, Climate Action and Environment Richard Bruton as “relevant projects” suitable to proceed.

The Arklow Bank is not among the windfarms listed as “relevant projects” but a spokeswoman for SSE Renewables said as the company does not envisage material planning amendments to its existing consent, the developer did not apply for the expansion to be designated as a “relevant project”.

Wicklow Co Cllr Derek Mitchell said he wanted both the Arklow Bank and another project – the Codling Bank windfarm – to go ahead.

“The greatest contribution Wicklow can make to reducing global warming is to get the Arklow and Codling windfarms working. This would be the largest contribution of any county, about 2.5 GW out of a national target of 5GW by 2030,” he said.