In wake of O’Hara death ‘feeling of sadness is unbelievable’ 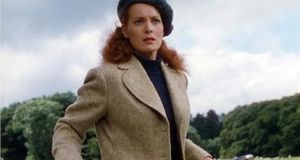 When O’Hara made an emotional return to Cong in 2011 for celebrations to mark the 60th anniversary of The Quiet Man, parish priest Fr Paddy Gilligan was asked to privately bring her communion in her room at Ashford Castle

Burnished by autumnal sunshine, the bronze double sculpture of John Wayne and Maureen O’Hara was attracting a steady stream of camera-toting visitors in Cong, Co Mayo, at the weekend in the wake of O’Hara’s death.

Some brought flowers which they respectfully laid in the screen legend’s lap as she rests in the arms of her towering co-star from the epic 1952 The Quiet Man.

“It’s gorgeous,” said Ann Delaney from Castleknock, Dublin, as she surveyed the memorial on Saturday, accompanied by her husband, Pat.

The Delaneys brought their children to Cong for a special Harry Potter event at Ashford Castle but were delighted with a chance to venture into Cong, the lakeside village made world-famous by the success of the John Ford classic.

By any standards, Ms Delaney qualifies as a bit of a Quiet Man buff.

“I’ve seen the film about 20 times,” she said. “It’s definitely one of my all-time favourites. Even our 10-year-old daughter, Ellen, has been asking about it. I think that since we came to Cong she’s picked up the Quiet Man bug.”

The Richards, a holidaying family from St Germain, just outside Paris, said they were a little gobsmacked to see the larger-than-life sculptures of Wayne and O’Hara which stand conspicuously near the centre of Cong, close to what remains of a 13th century Augustinian abbey.

Dubliners Pamela Large from Sandyford and her friend Melinda Fisher from Foxrock happened to be in Cong at the weekend but were delighted to see the level of respect and interest locally that was being shown in O’Hara following her death.

“She certainly was a great ambassador for Ireland, ” Ms Large said. “In real life she was a determined person, just like in the film, well able to talk.”

Paddy Rock, one of the organisational lynchpins of the annual event, said it was appropriate an event was being held to commemorate her and all the others who had participated in the classic film.

Ray McHugh, another festival organiser, said: “The feeling of sadness is unbelievable.”

Festival chairman Pat Luskin, whose late father John was an extra in the film, said: “Maureen was delighted to accept our invitation to join us for the 60th anniversary celebrations . . . She even brought John Wayne’s daughter and his granddaughter with her without telling us she would be doing so. It was a lovely surprise.”

When O’Hara made an emotional return to Cong in 2011 for celebrations to mark the 60th anniversary of The Quiet Man, parish priest Fr Paddy Gilligan was asked to privately bring her communion in her room at Ashford Castle.

“She may not have been in the best of health at the time but she went to great efforts to meet as many people as possible including a number of extras from the movie,” Fr Gilligan said.

“She was at all times charming and courteous.”

1 Covid-19: Travel restrictions to stay and 'green list' put on hold amid fears of second wave
2 Bobby Storey: The IRA's planner and enforcer who stayed in the shadows
3 ‘Only a civil servant’ could have come up with ‘unenforceable’ pub regulations
4 Trump claims US is under siege from ‘far-left fascism’ in Fourth of July event
5 Transgender Cork farmer (65) surprised at positive response to telling her story
Real news has value SUBSCRIBE