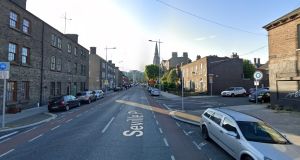 Gardaí investigating a fatal assault on a man in Dublin earlier this month believe he may have been injured by a someone who thought he was a burglar.

A postmortem examination was carried out on Saturday afternoon by Dr Heidi Okkers, from the Office of the State Pathologist.

The Garda said it is not releasing the results “for operational reasons” however it is understood Mr Kearney suffered serious injuries after falling to the ground following a single blow to the head.

The father-of-three is originally from Dublin 8. He worked as an industrial painter and had been living in Dundalk and Tallaght in recent years.

Gardaí believe a resident of Seville Place was at home just before 3am on Wednesday, September 2nd when he heard a noise and went to investigate.

The man subsequently confronted Mr Kearney, leading to the incident where he suffered the head injury.

The man called the Garda and an ambulance and Mr Kearney was rushed to the Mater hospital where he was placed on a ventilator. His condition failed to improve and he was pronounced dead on Saturday.

The resident made himself available for interview and is co-operating with the Garda investigation.

No arrests have been made and the investigation has not been upgraded to a murder inquiry. Gardaí are following a definite line of inquiry and is not seeking anyone else in relation to the incident. However they have renewed an appeal for witnesses to come forward.

They are also appealing to any road users who may have camera footage, including dash-cam footage, from the area at the time to make it available to them.

Gardaí have asked anyone with any information to contact the incident room at Store Street Garda station on 01 666 8000, the Garda Confidential Line on 1800 666 111 or any Garda station.

Mr Kearney, from Elm Grove in Tallaght had a history of drink and drug abuse which he had made efforts in the past to address. He recently served a three year sentence for the armed robbery of a Dundalk bookmakers and had about 30 convictions for public order, road traffic burglary offences.

He also had a previous conviction for dangerous driving causing death following an incident in 2006. Mother-of-five Rose Martin (57) was a front-seat passenger in the car driven by her husband when a vehicle driven by Kearney crashed into it on New Year’s Eve. She died in hospital 11 days later.

‘You feel like you’re trapped in this Leaving Cert. It just keeps going on and on’ 13:46
Woulfe resignation would be unjust and disproportionate, Denham report concludes 13:45
Coronavirus: Derry and Strabane set for further restrictions 13:10
Pharmacist suspended from practising over risk to public health and safety 12:49
Gardaí seize €4 million in cash from organised crime group 12:38