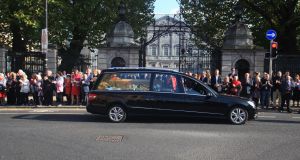 Hundreds of mourners lined the streets of Dublin on Wednesday for the funeral cortege of Emma Mhic Mhathúna, a high-profile campaigner in the CervicalCheck controversy.

Politicians and their staff stood outside Leinster House and clapped as the funeral cortege passed by, while some women held bunches of red roses.

The cortege also passed by Government Buildings and the Department of Health, as well as Áras an Uachtaráin.

Ms Mhic Mhathúna was then buried with her mother in Maynooth, Co Kildare.

Emma Mhic Mhathúna saw her death not as part of God’s plan but due to human error, a funeral Mass for the 37-year-old heard in Dublin’s Pro-Cathedral earlier today.

The victim of cervical cancer came to the public eye earlier this year through her campaigning to highlight the CervicalCheck controversy over misread smear tests and how it had affected her. She had settled a case against the HSE and a US laboratory for €7.5 million after she was not informed about the incorrect reading of her smear tests.

Family priest Fr Paddy Moran, who celebrated Wednesday’s Mass, said during his homily that he had met Ms Mhic Mhathúna in St Vincent’s hospital during her illness.

He said: “When I called in to see Emma [in hospital] I was very struck by two things. Firstly her sense of calm and secondly her ferocious love for her children. Natasha, her daughter, was in the room. I asked how she [Emma] was doing.

“Her reply was very striking. Her illness, she said, she did not see as part of God’s plan, but rather as the result of human error. She said the organisations who made errors had apologised and that those letters of apology meant a huge amount to her. She didn’t want those letters for herself but for her children.”

Regarding the apologies she had received, he said, she had spoken with no malice, anger or bitterness. “Just a mother thinking first and foremost of her children. We talked about her illness, which she spoke of in a very calm manner. I told Emma that I thought she extraordinarily brave.”

Referring to her religious faith, he said he had also spoken to her of her “great joy” when she and her family had met Pope Francis during his recent visit to Ireland.

“Hand in hand with her faith is that Emma was a person who loved fun, was herself very funny and sought humour even in the most unlikely of places. She sent these real texts to her friends. During her treatment she wrote: ‘I had radiation today but am free tomorrow. Let’s make plans.’ From her hospital bed she wrote to her friend: ‘I have free reflexology, free aromatherapy massage, a free twin room and free food. Do you want to come up and stay?’”

In the Dáil, he expressed his condolences to the family and friends of the 37-year-old, particularly her children “Natasha, James, Mario, Oisín and Donnacha. who obviously are foremost in our minds today”.

Mr Varadkar said she “fought like a lioness to protect and provide for her children”.

The Taoiseach said that “like everyone in this House I am filled with sorrow that she has passed on and passed on so young”.

He said he did not know her but like a lot of people he felt that he did. “She was witty and had a wonderful way with words.

“And those words forced us to act, and in recent months she was very understanding of the efforts that we were making to put things right.”

He hoped that “something good will come of this tragedy and that . . . we can virtually eliminate cervical cancer in Ireland as a disease”, in part through extending the HPV vaccine to boys and “by improving our screening and also building a health service that is more open, more honest and more respectful of patients.

“I think it is the kind of legacy that I think we should try and achieve in respect of her death.”

Mr Varadkar requested that the flag over Government Buildings be lowered to half-mast as a mark of respect.

Sinn Féin leader Mary Lou McDonald also paid tribute to Ms Mhic Mhathúna and expressed her solidarity and that of her party to her family and friends.