An anti-lockdown protest was met with with a counter protest in Dublin city and Gardai struggled to keep the two protests at distance. 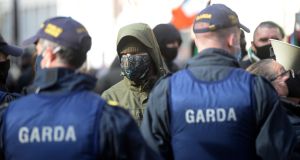 Hundreds of protesters clashed over lockdown measures in Dublin city centre on Saturday with gardaí at times struggling to contain violent exchanges between both sides.

A protest by anti-mask and anti-lockdown groups, including the right-wing National Party, was organised to take place outside Leinster House at 1pm on Saturday. However, scuffles quickly broke out when the demonstration was met with a group of counter-protesters.

Gardaí confirmed an investigation focused on the organisers of both protests is now under way, while two men, one in his 30s and second in his 40s, were arrested for public order offences.

A full Garda operation was in place from early morning involving up to 100 Garda personnel from the Dublin South Central and North Central divisions, as well as the National Public Order Unit and the Garda dog and mounted units.

The group of at least 100 counter-protesters, which appeared highly coordinated but made up of disparate groups, met opposite the Shelbourne Hotel on St Stephens’s Green at 12.45pm.

The group, all of whom were masked and mostly dressed in black, marched down Dawson St and turned right onto Molesworth St before moving towards Leinster House chanting “Nazi scum, off our streets”.

The group was flanked by uniformed gardaí on bicycles, while several Garda vans from the force’s public order unit remained on standby in the vicinity. Plain clothes members of the Garda also mingled among the crowds.

The anti-lockdown protesters at Leinster House began to chant “Antifa” at the counter-protesters as they moved closer, and, as soon both sides were within yards of another, both surged forward and violent clashes immediately ensued.

Dozens of people on both sides threw punches and kicks, while nuts, bolts, fireworks, and other projectiles were launched. Nearby gardaí on bicycles quickly dismounted, threw them to one side, drew their batons and rushed in to break up the violence.

Other members of the force jumped over cordons and began to form a line between the two groups. As gardaí began to get the situation back under control, steel barriers were quickly erected to keep both sides apart.

However, several counter-protesters broke away and tried to reach the other group by bearing away up Kildare St before more gardaí moved in and blocked their passage.

The gardaí at times struggled to contain the situation as protesters from both sides tried to circumvent the barriers and reach the other side by moving around to different streets.

At one such point, when it appeared as though more chaos may be about to unfold, a Garda member screamed at colleagues lined up in front of him to “hold the line”. Moments later, he shouted again: “No matter what happens out there, don’t break the line please.”

At another point, a woman among the counter-protesters approached the Garda line, prompting a Garda to draw her baton and shout “get back” before the woman withdrew.

Later, a man fell to the ground after being punched in the face by a protester on Molesworth St who seemed to believe he was a member of the anti-lockdown group who had circumvented gardaí.

At several points, members of the group of counter-protesters, with their entire faces covered, approached members of the media and demanded to see credentials and identification.

Some threatened reporters and attempted to stop the taking of photographs and the shooting of videos. Members of the gardaí intervened on at least two occasions to stop these interventions turning violent.

As Justin Barrett, the leader of the National Party, spoke through a megaphone at Leinster House, the counter-protesters formed a line along Molesworth St and refused to allow members of the public or the media to pass as the gardaí looked on.

When The Irish Times attempted to move back up the street, a man approached and demanded identification. When this was refused after the man himself refused to identify himself, the man said: “I’m going to have ask you to move on.”

The man confirmed he was not an undercover member of the Garda.

Some time later, more than two hours after the start of the clashes, the group began to march back down Molesworth St and once again attempted to circumvent Garda cordons at each end of Kildare St. Gardaí again moved in quickly to erect fresh barriers at either end.

As the group ran down Kildare St, one member of the group shouted to the others to “keep it tight” as they approached the Garda cordon. However, once it became clear that all access to Leinster House was blocked, the group marched on the GPO before finally dispersing.

As the group was making its way across the city, members of the public eating lunch outside cafes or sitting on the tops of the buses, looked on open-mouthed.