Woman held as cocaine valued at €50,000 seized in Roscommon

Suspect in late teens detained after van searched in Tulsk 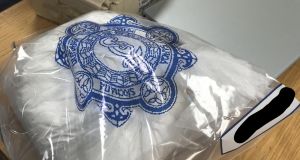 A photograph issued of the cocaine seized in Co Roscommon on Friday. Photograph: Garda Press Office

Gardaí ­ have arrested a woman and seized cocaine valued at €50,000 in Co Roscommon.

The woman, who is in her late teens, was detained after a van was stopped and searched on the N5 at Tulsk at about 7.30pm on Friday.

She was taken to at Castlerea Garda station where she is being held under Section 2 of the Criminal Justice (Drug Trafficking) Act 1996.