How to make a meal of our sea buckthorn problem

If you find you’re not beating alien invasive plants, you could always try eating them, as a project to help rescue the flora of North Bull biosphere reserve is doing 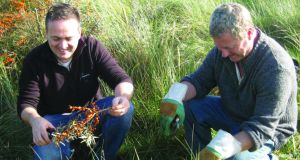 People often wonder, sometimes despairingly, what they can do when alien invasive plants crowd out native flowers and wildlife in places they love. Dublin City Council has an innovative solution: you may be able eat them. They may also give new flavours to local restaurants, so providing a profitable link between business and biodiversity.

The seeds of this solution began to grow when two council staff observed birds feeding voraciously on sea buckthorn’s orange berries on North Bull Island, in Dublin Bay, and apparently getting happily tipsy in the process. If birds liked them so much, perhaps we humans might enjoy them also.

And then they observed something else: humans were indeed sometimes picking them there. The pickers were mainly “new Irish” immigrants, whose traditions often tie them more closely to foraging for wild food than ours do.

So Pat Corrigan, supervisor of the North Bull biosphere reserve – a Unesco designation – and Mick Harford, district parks officer, began to wonder if longer-established Irish people might also be encouraged to appreciate sea-buckthorn berries. They needed help, and this plant was causing them an awful lot of grief.

The orchids and other wild flowers that light up the dune slacks along the centre of the island are one of Dublin’s great botanical treasures. But these rare plant communities are threatened by the advance of sea buckthorn, an exotic shrub originally planted as shelter belts on the island’s two golf courses.

The golfers have done a pretty good job, especially at St Anne’s, in clearing buckthorn from their premises, now that they have been made aware of the problems it causes. But those birds that so favour the berries have long since spread the seeds they contain to several especially rich areas of the nature reserve.

Left to itself, the buckthorn forms impenetrable thickets, shading out native species almost completely. It also enriches the soil, by fixing nitrogen through its roots and by adding a layer of leaf litter every year.

That might sound like a good thing, but in fact the native species that flourish in the dunes are dependent on nutrient-poor soil, so they may take time to re-establish even when the buckthorn is cleared.

Battle stations
The reserve staff have battled to contain the advance of the buckthorn, with limited success. They are also constrained by clashing conservation priorities. On the one hand they are obliged to clear alien invasive plants. On the other they are not permitted to clear shrub vegetation during the spring and summer nesting seasons, as many birds find the buckthorn thickets an attractive protection from predators.

So autumn and winter are critical times for clearance. But there’s another catch: in autumn the buckthorn plants are festooned with berries. And clearing the shrubs in this condition scatters its seeds in the ground disturbed by clearance, where they will germinate most easily.

So clearance can simply facilitate further infestation.While brainstorming solutions to this particular problem with Niamh Ní Cholmain, the council’s community biodiversity facilitator, Corrigan and Harford had a eureka moment.

They would not only organise volunteers to pick lots of the berries but also link the project to their use in a local restaurant. If the eating of sea-buckthorn fruit products became established, this could create a new weapon for the plant’s long-term eradication all over the country.

Sea-buckthorn berries are not only edible – after they have been frozen and macerated – but also very rich in vitamin C, and may also be beneficial for digestive disorders. Health-food shops sell products derived from them.

But you need tasty dishes as well as health benefits to promote a new food, so Ní Cholmain asked a local chef, Liam Moloughney, of Moloughney’s restaurant in Clontarf, to experiment with recipes.

Moloughney needed no conversion to the general idea. The use of “wild and seasonal” products, such as elderflowers and berries, rose hips and wild garlic and chives, are already part of his signature. But he had to admit he had never heard of sea buckthorn until he got Ní Cholmain’s call.

So how did he find recipes?

“The internet is a wonderful item,” he says wryly, “and so is trial and error. But once you decide to use the juice as a flavour in curds and ice cream, it’s pretty straightforward.”

He is still testing the ice cream on his menu, with a salted-caramel chocolate tart. Some people love it, he says, and some people don’t.

One Saturday last month the council connected with groups such as Dublin Community Growers, the Lifeline Project and students from DIT, and about 50 volunteers picked buckthorn berries for a few hours. Moloughney offered them a buckthorn-berry-based fizzy drink, “not unlike Rubex”, as a refreshment before they started.

Food for thought
He also shared his recipies with them, along with a very tasty one for salsa that Ní Cholmain discovered.

“My three children enjoyed it all bigtime,” says Suzanne Fuchs of Dublin Community Growers, who took part in the picking festival. “The only downside is that you can’t eat them off the bush: you must freeze them first.”

Reserve staff were happy to see volunteers carting away bin liners full of berries. But they hasten to add that many berries remain: people are still welcome to go out and pick them themselves any time they want.

“The State can’t cope with the problem of alien invasive plants on its own resources alone,” says Maryann Harris, the council’s biodiversity officer. “We absolutely need volunteer help.”

And volunteers are definitely needed for the next, and rather tougher, stage of buckthorn eradication: clearance of the shrubs themselves. There will be a session on North Bull Island next Saturday – that’s November 9th – led by Conservation Volunteers, from 11am to 2.30 pm, and another on November 30th. You’ll need gloves and secateurs.

You can get more information from Niamh Ní Cholmain at 01-2223369 or niamh.nicholmain@dublincity.ie or