How the political parties are preparing for an early election 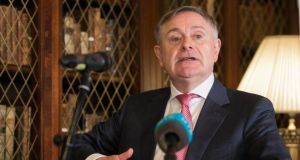 Labour leader Brendan Howlin has secured a commitment from his seven TDs that they will all stand again. Photograph: Gareth Chaney/Collins

For the past few weeks, Ken O’Connell, Sinn Féin’s political director, has been travelling the country ensuring his party is election-ready, from checking in with local organisations to preparing election literature.

Another political figure – Tony Williams, the Independent Alliance’s chief of staff – took to the road this week too, calling on councillors the Alliance hopes will stand under its banner at the next election.

Fianna Fáil, which insiders say is in a state of perpetual election preparation, reconstituted its constituencies committee, which considers candidates and strategies before Christmas, and it will meet again next week.

Fine Gael, awaiting its leadership contest, is preoccupied. But an hour is still set aside almost every week for the Taoiseach and senior party figures to assess its developments in a key constituencies.

Labour leader Brendan Howlin has secured a commitment from his seven TDs that they will all stand again and the party’s selection conventions will begin in the coming weeks.

Nobody in Leinster House expects an election in the immediate future, yet there is an acknowledgment of the need to prepare for one from here on.

It is the natural cycle of things; the difference this time is the electoral cycle has been considerably shortened.

The confidence-and-supply agreement between Fianna Fáil and Fine Gael expires after three budgets and, once the third is passed in October 2018, the ticking clock will become deafening.

A Fianna Fáil source said election preparation really begins 18 months out from polling day. We are now just 18 months away from the expiry date of confidence and supply.

For O’Connell, his task was given added urgency when Gerry Adams, in the wake of the recent controversies over Garda whistleblower Sgt Maurice McCabe, ordered that the party be put on election footing.

Such phrases are often just empty rhetoric, but Adams meant it. As well as getting in his car, O’Connell checked if party TDs would be standing for the Dáil again.

Martin Ferris, the Kerry TD, and Caoimhghín Ó Caoláin of Cavan-Monaghan are expected to retire at the next election. While a question mark lingers over Adams himself, party figures say their president’s future is for him to decide in his own time.

Sinn Féin is hoping for some gains – Wexford, Longford-Westmeath, Galway West and a second seat in Donegal are targets – but knows it has a challenge to hold on elsewhere, such as in Cork South Central, Offaly and Cork East.

The task before Tony Williams was similar to O’Connell. Williams checked in with potential candidates this week and the Independent Alliance hopes to have about 12 credible contenders, in addition to its five TDs, at the next election.

Kevin “Boxer” Moran, the Alliance TD for Longford Westmeath, is seen as the template for the ideal candidate.

In Fine Gael, the party’s steering group (formed in response to an internal party report into its failings at the last election) usually meets once a week in Leinster House, for an hour on a Wednesday, before the parliamentary party meeting.

Key constituencies are monitored, with updates provided to Taoiseach Enda Kenny, and soon to his successor.

The target list is understood to include Tipperary, where Fine Gael has no TD, as well as constituencies where the sitting deputy may retire, such as Dublin South Central and Sligo-Leitrim, where Catherine Byrne and Tony McLoughlin are now in place.

Kerry is also a concern, as is Cavan-Monaghan, according to party sources. At the moment, discussions at the weekly meetings are “broad brush strokes”.

The steering group – chaired by the Taoiseach, with Tánaiste Frances Fitzgerald and a small group of others in attendance – also discusses other matters.

A recent meeting saw Kenny inquire about how the election to succeed him will be run, with those present taking it that the Taoiseach was trying to figure out how his intended date of departure could be squared with the mechanics of the coming contest.

However sources within the party believe general-election preparation will significantly accelerate once a new leader is in place, should Kenny’s successor go to the country in the autumn in search of a mandate of their own.

Fianna Fáil sources say its primary aim is to hold the 44 seats it won last year, as well as the additional one it picked up in Wicklow with the recruitment of Stephen Donnelly.

“Five and half” seats are top of their target for gains, the five being constituencies in the capital, and the half being the Longford end of Longford-Westmeath.

Some senior party figures in say its election preparation has not sped up in recent months. “We have been preparing for the next election since last May,” said one TD. While others say they are now “getting down to business”.

One source suggested a number of potential candidates have been identified, some who are understood to be high profile. But the information is being kept from incumbent deputies who may try to deter an unwanted running mate.

“We don’t want them getting spooked by the sitting TDs,” said a well-placed source.

As well as its “5½” main targets, Fianna Fáil has its eyes on other constituencies where senior TDs will be expected to bring in a running mate, such as Limerick county and Limerick city, Clare and Offaly.

Every crisis in government, real or manufactured, prompts the question of whether Fianna Fáil will precipitate an election, but senior figures insist they will honour their agreement with Fine Gael until the end.

The end, however, is drawing ever nearer and politics is preparing for its arrival.