Opinion: Disbelief in capital after attack that will pile pressure on prime minister Stefan Löfven 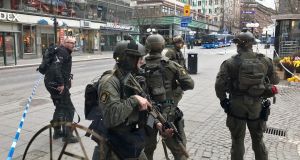 Police officers stand guard in Stockholm: the Åhlens department store into which a truck ploughed on Friday is where Stockholmers meet friends on a daily basis. Photograph: Johan Ahlander/Reuters

As tens of thousands of Stockholmers streamed out of the city on foot and on their bicycles in the wake of Friday afternoon’s terror attack, one was reminded of New Yorkers stoically crossing the city’s bridges on 9/11.

The death toll in what was described by the prime minister as a terror attack in the Swedish capital may be insignificant by comparison, but its effect on the country’s politics ahead of next year’s planned general election will be seismic.

As office workers and cinemagoers came out of their locked-down buildings in the hours after the attack, there was a sense of disbelief.

Of all the nations that might be in the crosshairs of terrorists, surely Sweden, which has taken in more refugees per capita than any country in Europe, would be way down the list? Whether this incident turns out to be domestic or Islamist related, terrorism operates according to a logic all of its own.

Long before Donald Trump’s famous speech about “last night in Sweden”, the country was at the forefront of the intellectual debate about integration and immigration in Europe.

The far right will waste little time in making political capital out of Friday’s brutal events.

Having sprung from the ashes of the neo-Nazi movement in 1989, the far-right Sweden Democrats have doubled their vote in recent elections, and they will be licking their lips at the prospect of taking advantage of an Islamist attack on home soil, if that is what this turns out to be.

Egged on by their colleagues on the far right around the world, they have long sought to portray Sweden as a multicultural catastrophe, a depiction which has (erroneously) made Malmö the rape capital of the world.

In truth, Sweden accepted 163,000 refugees in 2015 and the number of rapes actually went down. Despite the burden it has to deal with as newly arrived immigrants are sluiced into society, the Swedish economy is powering ahead.

On the other side of the debate is prime minister Stefan Löfven, the man who declared Sweden to be a humanitarian superpower, although some of his subsequent actions have proven to be less humanitarian than one might have expected.

Löfven and the Greens are locked in a battle against the centre-right Alliance block, made up of the Moderate (Conservative) party, the Centre Party, the Liberals and the Christian Democrats.

The Moderates, in particular, have been flirting with a more hardline approach to immigration, but recent statements by leader Anna Kinberg Batra on that front led to a sharp drop in popularity.

What has rocked Sweden about Friday’s attack, which Swedes have been preparing for but hoped would never come, is the combination of centrality and banality that were its hallmarks.

Located right beside the city’s central metro station, the Åhlens department store is where Stockholmers gather to meet friends on a daily basis. It is one of the few places that those from out of town could find without a map. Put simply, pretty much anyone who has ever visited the city has been there.

The truck crashing into the wall of the iconic department store sends the signal that no one is safe.

The response by emergency services was swift and comprehensive: the city centre was locked down, and public transport and major attractions, from shopping malls to sporting arenas, were also quickly closed to the public.

However, regardless of the effectiveness of the response, the thorny political issue will remain, and pressure will soon be brought to bear on prime minister Löfven.