House of Lords votes to suspend Lord Maginnis for 18 months 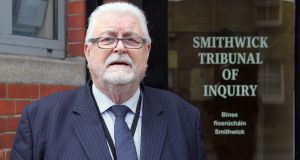 Lord Ken Maginnis said he had been a victim of a campaign against him by the LGBT rights group Stonewall. File photograph: PA

The British House of Lords has voted to suspend Lord (Ken) Maginnis for at least 18 months over allegations of bullying, harassment and homophobia.

It had recommended his suspension for at least 18 months and this motion was carried by 408 votes to 24.

The committee also suggested the 18-month suspension could be extended if he did not undergo behavioural training and mend his ways. Lord Maginnis of Drumglass had denied the allegations and described the committee’s findings as “ridiculous”.

Among those who voted against the motion were Lord Maginnis himself, former UUP MP Lord Kilclooney (John Tayor) and DUP peers Lord (William) McCrea and Lord (Maurice) Morrow.

Lord Maginnis had protested that in January he was told unnecessarily to take a circuitous route into the House of Lords after difficulty locating his security pass. He had trouble walking due to illness, he said.

Scottish National Party MP Ms Bardell said Lord Maginnis became rude and aggressive when she intervened during the exchange with Mr Bombolo. She said it was “one of the worst cases of abuse of security staff” she had witnessed.

Lord Maginnis was also investigated for using homophobic language about Labour MP Mr Pollard. In February he became annoyed with Mr Pollard’s chairing of a British armed forces all-party parliamentary group, prompting him to send an email of complaint with the heading, “Discrimination by Homos”.

Mr Pollard said the email made him feel like a “victim of abuse”.

Lord Maginnis also said he had been a victim of a campaign against him by the LGBT rights group Stonewall. That organisation in turn said the peer should “step up and accept responsibility for his behaviour and apologise to those he has hurt”.

Lord Maginnis told BBC Radio Ulster last week that he had “held responsible positions all my life. At 83 years of age, I’m not going to be dictated to in this way.”

Lord Maginnis had been a UUP peer, but in 2012 resigned his membership after the leadership criticised him for referring to gay marriage as “unnatural and deviant behaviour” and linking homosexuality with bestiality.