‘To be honest, I just went on Google and typed in monologues for women and girls’ 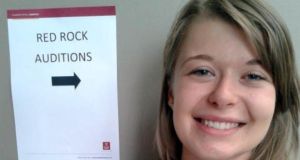 Monika Gaciarz at TV3 auditions in Limerick for their new soap Red Rock. “It was very easy, very quick. The girl said if I forgot some of it to just make it up.”

About 200 people came to the Clarion Hotel, on the banks of the Shannon in Limerick, this weekend carrying their dreams of stardom. TV’s new soap opera, Red Rock, due to be screened in January 2015, was holding open auditions in both Limerick and in Cork. Four hundred people auditioned in Dublin last week.

Candidates were asked to prepare a short monologue, and to deliver it – in their own accents – to a video camera and a casting assistant. They went in one at a time; afterwards most were happy to talk. Nigel Shinnors, 27 and standing about six foot six, had perfomed a scene form Zero Dark 30. “They’re trying to catch Bin Laden,” says Nigel. “It’s the CIA Director talking to his colleagues. I think it went well enough.”

Gary Swayne (44) and his wife Carrie had come from Kildare so that he could deliver a monologue from the film American Beauty. Gary, who used to work in a warehouse, has done what he calls “A small bit of acting...I was in a film All About Eva, which was funded by Kildare Council. I’m never confident. Even today now, I think I scotched it, with my nerves.” Carrie says that no one gets it right all the time “Otherwise they wouldn’t have out-takes,” she says.

Margaret Power, a nurse from Limerick, had written her own monologue. “It’s about a date I went on and at the end the guy wanted me to pay half and I was really embarrassed because I had no money, and he said I could pay him back on the second date and I said there wasn’t going to be a second date.” She says that, unsurprisingly , this monologue always goes down well.

It was American monologues that filled the day. Oisin Galvin,had come from Galway with his mother Linda and younger sister Maeve. “I did Andrew’s confessional speech from the Breakfast Club,” he says. Even though, at 18, Oscar wasn’t born when that film was made. “I played a Fenian soldier in the 1916 movie for TG4,” he says. But his great advantage must be that his family recently returned from America, and so he has a true American accent. “See, that’s the kicker right there,” he says.

Monika Gaciarz (22) originally from Poland, came from Cahir, county Tipperary, to perform a monologue from Gypsy. “To be honest, I just went on Google and typed in monologues for women and girls,” she says. Monika has a primary degree in European Studies from the University of Limerick. She was full of praise for the staff running the auditions: “It was very easy, very quick. The girl said if I forgot some of it to just make it up.”

Asked if she had any acting experience Aisling Dillon (15) nodded solemnly. “Yeah, in primary school.” But really, as the casting agent in charge, Louise Kiely, says, “We’re just looking for potential”. Aisling’s best friend, Adam Galvin, also 15 and from Limerick and auditioning today, is a big fan of Johnny Depp. Adam performed a monologue from a film his brother made in Transition Year. Aisling did a speech from Forest Gump.

Limerick’s professional actors welcomed auditions coming to them, for a change. Going up to Dublin is expensive. Joanne Reilly has been in a soap already — TG4’s Ros na Run. “ I played Grace, a psycho, stalker bunny-boiler who had a phantom pregnancy and arranged a kidnapping. Just be yourself, they said...” In her audition Joanne did “ a short monologue from the film, Revolutionary Road... just to depress Louise before her lunch.”

But Louise Kiely was far from depressed. “The thing we get when we get out of Dublin is new talent,” she says. “Every place we go I’m only pleasantly surprised, by how talented people are, and how brave.” Auditions for Red Rock continue next weekend in Galway and Belfast. Details on redrock.ie