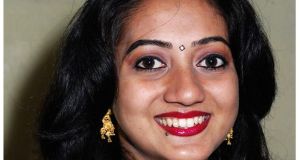 Hillary Clinton, the Democratic presidential front-runner, was given a detailed briefing about the death of Savita Halappanavar before she visited Ireland in December 2012, her newly released emails show.

A week before her trip, the then US secretary of state received an email from Melanne Verveer, Mrs Clinton’s chief of staff when she was US first lady, telling her about the circumstances of the 31-year-old’s death just over a month earlier.

“In advance of your trip to Ireland, we wanted to raise a few issues about the case of Savita Halappanavar, the woman who died last month after doctors refused to perform an abortion and waited to remove the fetus until its heartbeat stopped days later,” Ms Verveer wrote.

Three paragraphs are redacted by the State Department, which released the correspondence this month in the latest batch of Mrs Clinton’s emails to be made public in response to the controversy around her use of a private email server for official government business.

She is told by her senior aide the case had “reopened a decades-old debate in Ireland over whether the government should pass legislation to allow abortion when the life of the mother is at risk”.

Ms Verveer, who has worked on Mrs Clinton’s global programmes on women’s rights, told her abortion was “still being hotly debated in Ireland with clear political divisions over whether legislation should be passed clarifying the circumstances in which abortion should be permitted to save the life of the mother”.

She warned Mrs Clinton about raising the case publicly during her visit because a Government-ordered investigation was not yet complete.

“Clearly, this is a terrible situation that has justifiably received condemnation around the world,” she wrote on December 2nd.

In a speech at Dublin City University on December 6th, Mrs Clinton made a veiled reference to the case, telling her audience that health programmes can often be imbalanced in ways that were not obvious.

“The result is women and girls don’t get the care they need when they need it and many die unnecessarily,” she said. “So our starting point must be this: women’s lives matter. And promoting the human rights of women begins with saving the lives of women whenever we can.”