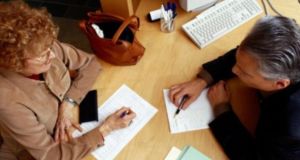 The Association of Higher Civil and Public Servants general secretary Ciarán Rohan said forthcoming talks with Government should not be a matter of recruitment versus pay restoration. He said both must be addressed. Photograph: Getty Images

Higher civil servants have said they would not support further public service reform if it meant additional attacks on their terms and conditions.

Speaking at the annual conference of the Association of Higher Civil and Public Servants (AHCPS), general secretary Ciarán Rohan said forthcoming talks with Government should not be a matter of recruitment versus pay restoration. He said both must be addressed.

He said his members had had pay cuts of between 20 per cent and 23 per cent.

He said their net pay was now at the same level as it was more than 13 years ago, while the consumer price index had risen by 25 per cent over the same period.

“If there is no emergency, then the legislation cannot apply.” He said the association had recently met political parties and Independent TDs.

“All were supportive of an independent pay determination mechanism recognising that, in a normal functioning democracy, parliament has no place in determining pay,” said Mr Rohan.

“Sinn Féin did not give the same commitment and indicated that their focus was on the lower-paid. Renua’s view was that any restoration had to be accompanied by reform.”

Mr Rohan said the association welcomed the Government’s decision to end its moratorium on recruitment in the public service.

He said the numbers in most departments and offices had been cut to the bone. “This should not be a matter of recruitment versus pay restoration. Both issues should be addressed.”