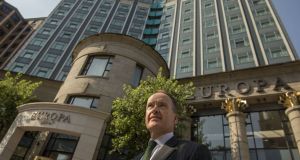 Dr Howard Hastings is the Northern Ireland hotelier who “bet the farm” on the Europa Hotel in Belfast.

At the time every front window of the then closed city centre hotel – reckoned to have been bombed 28 times during the Northern conflict – was boarded up with plywood from a yet another big IRA blast designed to wreck the commercial heart of Belfast.

Dr Hastings recalls that McMullan Glass and Glazing from Moira, Co Down, gave the hotel a very good deal to re-glass all the windows in the expectation, he surmises, that there would be many more IRA bombs and many more glazing contracts.

As it transpired, that was the last bomb. The following year the IRA declared a ceasefire, and the peace process, with a number of faulty starts, kicked into gear. The Europa, as well as the rest of the Hastings hotel group, has since motored from strength to strength. It was the group’s “bet the farm moment”, says Dr Hastings.

He remembers the collapse of that ceasefire in February 1996, but he didn’t panic. “We were always glass half-full people.”

It is an optimism that was badly needed to get business people over more hard times. While the July 1997 ceasefire 17 months later was hugely welcome, Northern Ireland still had to suffer through more years of parading disputes which were a turnoff to tourists.

The company also owns the Slieve Donard in Newcastle, Co Down; the Stormont and Culloden in Belfast; the Ballygally Castle near Larne; and the Everglades in Derry. In Dublin it has a 50 per cent stake in the Merrion Hotel.

The phone numbers of the hotels in the North end in 1066, as in the Battle of Hastings, while company cars also bear the 1066 number.

In 2015 it bought the 22-storey Windsor House, Belfast’s tallest commercial building, for £6.5 million (€7.3m) – again quite a deal considering that in 2006 it was purchased for £30 million (€33.7m) by a group that went wallop in the economic crash that followed shortly afterwards. The Windsor is being transformed into the new 300-room Grand Central Hotel opening in June next year.

But then came Brexit.

However, while concerned Dr Hastings is not panicking. He says in the short-term at least Brexit has been good for business because visitors from the Republic get more value for their euro due to the weakening of sterling. “You see more Southern car registrations on the roads.”

Ireland’s biggest tourism markets are Britain, the US, France and Germany.

“But peculiarly,” says Dr Hastings, “Commonwealth countries like Australia – half a world away – would still bring more visitors to Northern Ireland than Germany.”

So Brexit, and the better value euro, also may bring new opportunities to attract more visitors from continental Europe to Northern Ireland.

Yet most international tourists visiting Northern Ireland first land in the Republic. “And that brings us to the big question over Brexit: would they be so tempted to come to Northern Ireland if there wasn’t the open access that there is at the minute?” says Dr Hastings.

He notes how former Northern secretary Theresa Villiers, a leading Brexiteer, gave assurances that there was no danger of a hard border with the Republic if the UK voted out. “But Theresa Villiers isn’t here anymore.”

He would love to attract more Southern and continental visitors, particularly during the quieter autumn and winter months. He marvels that there are an estimated 2.5 million people from the Republic who have never visited Northern Ireland.

“It would be hard to find anyone in Northern Ireland who hasn’t over-nighted in the South...Now is a good time to come up and see us.”

But again there’s that niggle over Brexit: would Border restrictions lead to coach and car loads of Southern visitors being caught up in Border hold-ups?

Would foreign tourists for the same reason prefer to remain south of the Border rather than journey north when they visit Ireland?

Most everyone says that won’t happen, but nobody knows for sure. In Northern Ireland, what business people crave is clarity, but there isn’t any yet.

Dr Hastings, a man prepared to take big business gambles, is generally optimistic for the future. But he warns that if Brexit makes it difficult for people to come to Northern Ireland, to visit or do business, then there is the danger they just won’t visit or do business.

He wants more investment in tourism marketing, and points to what he is sure is a realistic ambition to make Northern Ireland tourism a £1 billion (€1.13bn) industry by 2020 – it’s currently worth £860 (€967m).

He welcomes the content of the Tory-DUP deal with its aspiration to reduce or remove air passenger duty and to reduce hotel VAT from 20 per cent to about 9 per cent, as in the Republic.

He would also like to see more major events coming to Northern Ireland. Would the Ploughing Championship ever travel North? he wonders.

He also would love some political stability, with the DUP and Sinn Féin and their respective leaders getting Stormont back up and running in the autumn.

He says politicians in the North can put on a unified face to sell Northern Ireland abroad but they are more reticent when it comes to marketing throughout the island.

“It would be good to see more full-hearted engagement by our political leaders in making appearances on Southern media, addressing audiences and telling the Northern Ireland story as well as they do to more international audiences.”

And he has an idea about how that might be achieved. Dr Hastings wants to see Arlene Foster and Michelle O’Neill going down together to Dublin and appearing “on the couch with Miriam O’Callaghan on RTÉ” to tell potential visitors that Northern Ireland is a welcoming place.