Harris to ‘act immediately’ if medicinal cannabis approved by review

Minister for Health faced questions from mother of child with epilepsy 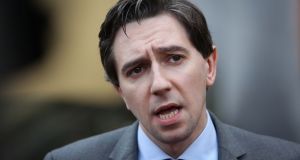 Simon Harris has pledged to act immediately to make medicinal cannabis more widely available if a policy review recommends such a move.

The Minister for Health faced a mother who accused him of reneging on a promise to make the drug available to her daughter who suffers from epilepsy.

Mr Harris was confronted by Vera Twomey during a visit to Mallow General Hospital this morning when Ms Twomey said that he had betrayed her as she sought to get medicinal cannabis for her daughter, Ava (6) who suffers from an extreme form of epilepsy known as Dravet Syndrome.

“You have betrayed us and the humiliation of standing outside that gate (at Leinster House) from quarter to two until half past seven yesterday until Gino Kenny came up and pulled me away from the gate because he said I had to come away because I was frozen with the cold.

Mr Harris disputed Ms Twomey’s claims and said that as a result of campaigning by her and other families, he had initiated a policy review by the Health Products Regulatory Authority on the use of medicinal cannabis and he expected that policy review to be completed by the end of the month.

“Vera Twomey is a woman that I have so much respect for - as health minister I have met her three occasions - two formal meetings and one discussion in Leinster House and I have had a number of telephone conversations with her and indeed I emailed her yesterday.

“Vera has talked publicly about the extraordinary difficult situation in which she and her husband Paul have found themselves with their daughter Ava and they would rightly do anything and everything for her and I recognise that,”he told the media during a press briefing later.

“As Minister for Health I want to do everything I can to help Ava and other patients who believe that medicinal cannabis can help them but let me very clear as to what my role is and what it isn’t - I am not a doctor so I am not in a position to prescribe medicine.”

“I have initiated a policy review in relation to medicinal cannabis and that review is due to be completed at the end of this month – I don’t what to pre-empt or prejudice it but I would hope that if it sees a benefit to the availability of medicinal cannabis, I can act on that immediately”.

Ms Twomey’s husband, Paul Barry told Mr Harris during the confrontation that they had two doctors who were willing to make an application for a licence to prescribe medicinal cannabis for Ava but each time the Department of Health comes back with further requirements.

The Departmentt of Health then sought the names of reputable companies the family were planning to use to import the medicinal cannabis and they had done that with the companies travelling to Ireland to meet department officials but they were still unable to get a licence for medicinal cannabis for Ava, he said.

Mr Harris was adamant the Department of Health had not received any application from a doctor to obtain a licence to prescribe medicinal cannabis for Ava.

He pointed to the fact that one family had already followed the procedure and was able to get medicinal cannabis for their child.

“An application was filled out for another child and was granted before Christmas - I can say very clearly today that when that application is submitted and if it is a doctor’s view that this medication should be made available - that application will be assessed immediately as an absolute priority.”