Doctors’ representative cautions that outcome of negotiations ‘should not be assumed’ 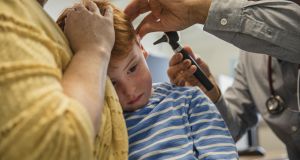 Doctors have warned that the introduction of the new extended free GP service should not be taken for granted. File photograph: Getty

The Government wants to introduce free GP care for all children under eight years of age from the middle of next year, Minister for Health Simon Harris has said.

However, he warned the move would be subject to the Department of Health securing funding and agreeing a deal on fees with family doctors.

Mr Harris said he hoped ultimately to see all children under 12 receive free GP care as part of a phased programme over the coming years. And he had “made that intention clear to GP representatives when we were negotiating a very significant investment package for general practice [earlier this year]”.

Doctors have cautioned that the introduction of the new extended free GP service should not be taken for granted, as talks on the move had not yet commenced.

Dr Pádraig McGarry, a GP and president of the Irish Medical Organisation (IMO) said “it was premature for any side to speculate” about when the service might be introduced until the matter had been negotiated between the Health Service Executive and the doctors’ trade union.

“The only agreement the IMO has made to date is to enter negotiations on the matter, so the outcome of those negotiations should not be assumed.”

Speaking in Dublin on Monday, Mr Harris said the Government’s initiative to extend free GP care to more children would require fresh legislation as well as additional resources and agreement with doctors.

He said introducing an extension to existing free GP care arrangements would be above and beyond the €210 million investment agreement reached with the IMO earlier this year.

In return for that deal, the IMO agreed to drop its objections in principle to the extension of free GP care to other age categories of children.

“It is the Government’s intention that we would bring it in for children under the age of eight from some time in the middle of next year. But that depends on agreeing the fee and legislation being passed,” said Mr Harris.

“If it is up to me I would like to do under eights next year, under 10s the following year and under 12s the year after that. But that is subject to the normal budgetary issues.

Mr Harris was speaking at the announcement of the allocation of €20 million for more than 120 health and social-care projects under the Sláintecare Integration Fund.

The Minister separately urged creche providers to make it good practice to ensure children who attend their facilities have been vaccinated.

The Irish Times reported on Monday that former minister for health James Reilly had told constituents in a newsletter at the weekend that children under eight would receive free GP care from next summer. Dr Reilly’s comments were believed to be the first occasion on which a Government representative had put a date on the introduction of such a development.