Hand-crafted ‘Temple’ in memory of dead burns in Derry 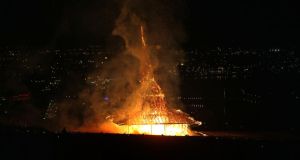 Within half an hour the structure had collapsed amid the flames. Photograph: Niall Carson/PA Wire 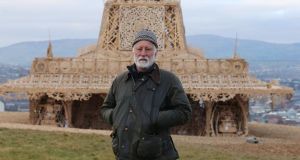 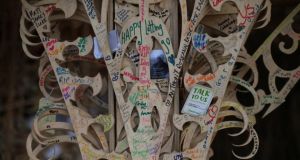 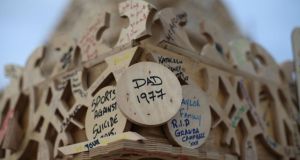 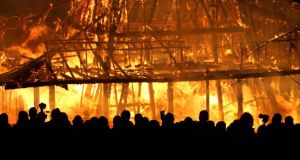 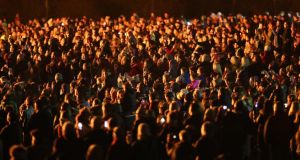 A timber memorial to people who have died was ceremoniously burned in Derry on Saturday night in front of a massive crowd.

Messages from thousands of people went up in flames after the intricately hand-crafted wooden art project, known simply as “Temple”, was set alight.

Personal messages on the pyre remembered victims of tragedy: babies, suicides, a young policewoman killed in a crash and those who died during the Troubles.

Among whose participating were people whose lives were blighted by one of the most infamous events of the Troubles - the shooting dead in Derry of 13 demonstrators by soldiers on Bloody Sunday in 1972.

One message said: “Happy birthday daddy, watching over us all.”

Another said: “Baby Kath, we look forward to meeting you one day.”

About 60,000 people visited the 70ft tower made of carved plywood which was erected over the past two months in the Waterside area.

Artist creator David Best said: “It is an incredible gift people are sharing with you.

“We had a father bringing his son’s picture, it was a picture of his son who had hung himself, and trusting us to put that up.

“It is an incredible gift betrothed on us.”

He said there were probably 40,000 names on the bonfire, etched into its wood or pinned to its structures on handwritten notes, some with flowers and photos.

The oldest visitor was a man of 89, who came to leave a tribute to his wife of 40 years who died of cancer.

Mr Best added: “There is a baby’s picture in there, those are tough. I have spent a lot of time talking to thousands of people about loss and they don’t seem to mind it.”

He said one man’s relative was killed at Bloody Sunday, in January 1972, when British paratroopers opened fire on innocent civil rights marchers in Derry.

“They have all moved on, Ireland has made peace - you don’t see any machine guns or barbed wire here.

“What I was building was a piece of celebration, that people of Ireland have come to grips with the Troubles - and this is a place for them to celebrate their accomplishments.”

The fire was lit by Tony Doherty and his son Rossa, among others. Their relative, married father-of-six Patrick Doherty, was 31 when he joined the Bloody Sunday march. A report by Lord Saville said he was unarmed and unjustifiably shot.

Flames spread upwards from the structure’s base, starkly highlighting its supporting beams until the tower collapsed, prompting a roar from the thousands of people gathered on the hillside overlooking Derry.

Within half an hour most of the structure was gone.

Presbyterian minister the Rev Graeme Orr said he feared the burning could leave people open to the influence of Satan.

But Mr Best said he believed it would help the bereaved end their pain. “If this is paganism, then I am Donald Duck, ” he said.

The aim behind the temple was to bring together the artist from the US’s Burning Man Festival in Nevada and the people of Derry to offer an alternative perspective on bonfires.

It was brought to the city by Artichoke, the London-based company behind the Lumiere lights festival which was a highlight of Derry’s year as UK city of culture in 2013.

“If I am challenging the church and contemporary religion it is only because they have got to do their job; if they are not out there helping people and lending a hand with the issues in the country and our world, then it is their problem.”