Halting site fire: ‘Our tears are falling, our hearts are breaking for you’ 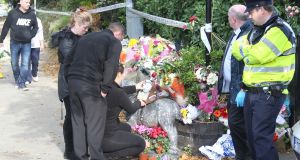 People gather to express respect while gardaí watch after a fire at a halting site, due to which 10 people died, on Glenamuck Road South, Carrickmines, Co Dublin. Photograph: Stephen Collins/Collins Photos

It was Megan McConnon’s sixth birthday on Monday. In years to come, she may remember the milestone more for being the day she went to a Traveller halting site in Carrickmines, Co Dublin – a world away from her own home at Belarmine in nearby Stepaside – to lay flowers in memory of some other children.

Megan, her mother Sonya, sister Skye, aged four and a half, and four-month-old brother Toby, fast asleep in his pram, were part of a steady trickle of people making the journey to the site of Saturday morning’s inferno.

On either side of the halting site entrance gate, and the utilitarian, galvanised, spike-topped metal fencing that separates it from all around it, mounds of flowers grew through the day.

Many were from families – some of them Travellers, many of them not – and some had personalised messages.

“Our tears are falling and our hearts are breaking for you as you face this unspeakable loss,” said one handwritten note.

Megan placed her bouquet of cream and blush pink roses against a granite rock. It fell over and so she threaded it instead into part of a wire fence.

Megan was rather too young and too shy to express herself, but agreed with her mother that the Traveller children who died in the fire had gone to heaven, “where granddad went last year”, said Sonya.

Sonya and her children did not know any of the five Traveller children who died.

Megan and Skye attend Kilternan’s Church of Ireland national school a few kilometres away; the Traveller children went to a different school nearby.

Sonya feels connected to the families of the dead. “I try to put myself into their shoes,” she says.

“My heart is breaking for them and their families. . . They just had no chance to get out, no escape route. The cabins seemed just to go up.”

Rose Mary and Michael Mongan drove over from Rathfarnham to pay their respects. “I can just never imagine what they’re all going through,” said Rose Mary.

Traveller Mary McDonnell came from Finglas on the other side of the city.

Mary lives on a Traveller site, in a house. If the Carrickmines site had had houses, things might have been different, she says.

“The accommodation should have been a bit better if they had had ordinary houses in there, or been on an ordinary Travelling site, with their own caravans.”

Another Traveller woman, who asks that her name not be used, lays a small wreath and explains that she knew the families of all the deceased.

“I knew them all. [They were] my husband’s first cousins; they’re cousins of ours. We were with the family just now and decided to come up here.”

“Did someone check was the fire hose working here?” the woman asks, “because I don’t think it was. I think it was actually cut because some Travellers, when they’re in camps like this, they use the hoses for to clean. So the council, sometimes they come out, and they cut them. Whether it happened here or not I don’t know?”

A spokeswoman for Dún Laoghaire-Rathdown County Council said there was a fire hydrant at the site and it was used by the fire brigade during the blaze.

Cars traversing the Glenamuck Road slowed to a crawl as they passed the site entrance and its growing floral display.

Behind blue and white Garda tape, two uniformed gardaí kept an eye on everything and accepted condolences for their colleague slain in Louth.

Forensic evidence gatherers continued working inside the site, now bereft of all residents, scouring the debris for any clue that might explain the catastrophe that killed 10 of them.