Carbine reputedly used at Battle of the Boyne to be auctioned 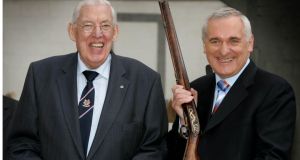 The late Ian Paisley with former taoiseach Bertie Ahern and the carbine musket (circa 1685) that Dr Paisley presented to him. Photograph: David Sleator

A gun famously presented to Bertie Ahern by the Rev Ian Paisley during a ceremony on the site of the Battle of the Boyne was a loan and not a gift, it has emerged.

The 17th-century flintlock carbine, which was reputedly used in the battle, will go under the hammer at Ross Auctioneers in Belfast next Thursday, where it is expected to sell for up to £25,000 (€34,000).

The battle, which resulted in the defeat of the Catholic forces of King James II by the Protestant King William of Orange, took place at Oldbridge, Co Meath, in 1690 and is an event commemorated annually on July 12th by loyalists in Northern Ireland.

The gun went on display in the Battle of the Boyne visitor centre near Drogheda.

But the gun was, apparently, a loan to the State, rather than a gift. Dr Paisley had borrowed it from a private collector in Co Antrim who requested its return and consigned it to auction. A replica is now on display in the museum.

Ironically, the rifle is marked with the cipher of James II, which means it was used by a Catholic soldier. The auctioneers said Dr Paisley may have been “tongue in cheek in presenting a weapon from the losing side” to Mr Ahern.