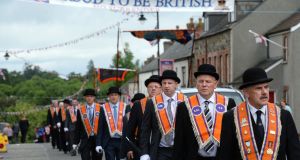 The Orange Order has called on politicians in the North to “grasp the parading nettle” and work to end marching disputes at its annual Drumcree parade and church service in Co Armagh.

Orange Order members have been protesting at Drumcree every Sunday since July 1998 in an attempt to complete the parade that would take them along the Garvaghy Road, in a predominantly nationalist area.

Portadown district master Darryl Hewitt says they will continue to do so “until our rights have been restored”.

He described the Parades Commission as “an unelected quango”, called for its officials to be “sacked” and told Orangemen it was “time for our elected representatives to grasp the parading nettle and come up with a much more equitable solution to parading disputes”.

In a speech to Orangemen, Mr Hewitt said: “Our resolve has not diminished over the weeks, months and indeed years. “No-one should be in any doubt - Portadown District are in this for the long haul.

“We will not be deflected from seeking to achieve our objective.”

As an act of defiance, the Orangemen ignored the Parades Commission determination that indicated they should leave the protest site by 2.30pm. “Here we stand, we can do no other,” Mr Hewitt said.

Previously, Mr Hewitt had said he was “disgusted at the lack of movement” from residents and the Parades Commission after the Orange Order reportedly offered to engage in talks with Garvaghy Road residents, chaired by a senior Catholic priest.

Authorities in Northern Ireland are cautiously optimistic the main fixture in the loyal order parading season - the Twelfth - can pass off peacefully, but have a major policing operation planned to deal with any unrest.

While the vast majority of the almost 600 parades are free of trouble each Twelfth of July, the threat of disorder at a small number of remaining marching flashpoints always has the potential to mar the day.

Thousands of PSNI officers will be deployed to parades across Northern Ireland on Tuesday, with contingency plans in place to call on additional Mutual Aid support from other UK forces if required.

PSNI commanders are confident such back-up from Great Britain will not be needed this year.

The Twelfth commemorates the victory of the Protestant King William of Orange over Catholic King James II at the Battle of the Boyne in Ireland in 1690.

Senior officers and Northern Ireland Secretary Theresa Villiers have voiced optimism for the day, noting a sense of reduced community tensions ahead of the event.

A number of early summer parades that in the past have been the source of discord have passed off without major incident this year.

A deal to resolve the region’s most volatile Twelfth parading impasse - at the Ardoyne/Twaddell Avenue community interface in north Belfast - collapsed last month.

However, the breakdown of negotiations between the Orange Order and nationalist residents in the Ardoyne area was not accompanied by the recriminations some might have expected.

A loyalist protest camp has been manned in the unionist Twaddell Avenue area since the Orange Order was banned by the Parades Commission from parading past the nationalist Ardoyne on its return from the main Belfast Twelfth parades in 2013.

A subsequent police operation to monitor the camp and interface has cost about £20 million.

The area has been the scene of rioting on a number of previous Twelfths - with republicans and loyalists having engaged in violence.

Construction of huge loyalist bonfires, traditionally lit on the “Eleventh night” to usher in the Twelfth commemorations, are nearing completion.

Controversy surrounds a number of the structures.

Last year, homes near Chobham Street in east Belfast had to be evacuated over fears the giant nearby bonfire structure could topple on to property.

While this year’s bonfire in the area has been moved away from those homes and is set to be smaller in scale, the fire is still the source of contention.

Equipment in a newly built children’s play park has had to be moved amid fears of damage.

At the huge Ballybeen bonfire at Dundonald in greater Belfast, environmental concerns about noxious fumes have been raised after footage emerged of a large number of tyres being dumped at the site for burning.

Alcohol has undoubtedly been a factor in the disorder witnessed during previous Twelfths.

The Orange Order has been proactive this year in encouraging Orangemen and women, loyalist bands and supporters to stay off the drink with a campaign titled “It’s about the battle, not the bottle”.

The Order plans to hand out thousands of bottles of water branded with the slogan on the day.

Away from the Twaddell dispute, one of the other main areas of concern this year - in the Castlemara estate in Carrickfergus - is actually linked to tensions within loyalist paramilitarism, rather a parading dispute with nationalists.

Ms Villiers said she hoped the Twelfth could be a “successful and enjoyable day”.

“I think there is a degree of optimism around the parading season, the big events coming up,” she said.

“It is of course very important with big public events of this size that every effort is made to ensure they are peaceful and orderly, and I am very much aware all the detailed preparation that the PSNI put into this and also I know there are many people across the community who are involved in both parades and protests who are also working hard to try to ensure that the Twelfth of July is a peaceful, orderly and successful day.”

“It is clear that dialogue is critical in the management of any event that involves the gathering of large volumes of people,” he said at July’s meeting of his oversight body, the NI Policing Board.

“I am encouraged by the level of positive dialogue that is currently taking place in our communities.”

He added: “I think it does a create a more optimistic outlook for the rest of the parading season.”

In a joint statement, they said: “The celebration of different memories, cultures and traditions in a respectful, dignified and peaceful manner has the potential to enrich our society. Equally, some may wish to protest, and it is essential this is done in a way that is peaceful and does not undermine law and order.

“As we move into a period which has in the past resulted in heightened tensions, we encourage everyone to conduct themselves in a dignified and lawful way.

“We all have a responsibility to show leadership and to continue to seek resolutions to contentious issues through discussion and ensure any difficulties are identified and resolved peacefully, thus showing respect for the views and wishes of everyone in the community.”