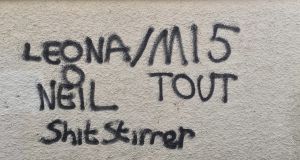 The graffiti which appeared in the Creggan area of Derry on Tuesday. Photograph: Leona O’Neill/Twitter

The National Union of Journalists has condemned as “vile and dangerous” graffiti attacking a Derry journalist.

Leona O’Neill, a freelance reporter, posted an image on social media of the slogans which she said had appeared in the Creggan area of the city on Tuesday.

She described the graffiti, which accused her of being an informer, as “a threat to my safety”.

So thankful for everyone’s support & kind comments after vicious graffiti about me appeared on the wall in Creggan, in my home city. The community have responded to it and it has been painted over. Thank you so much for your kindness and solidarity, it lifts me up, genuinely pic.twitter.com/CNLnOaS5qD

The graffiti was painted over on Wednesday.

In a joint statement Michelle Stanistreet, General Secretary and Séamus Dooley, Assistant General Secretary of the NUJ, said they strongly condemned this “clear attempt to intimidate a hard-working, committed journalist.”

There could be “no place in democracy for such behaviour,” they said. “Journalists must be free to report without intimidation. To describe a journalist as an agent of a police force is dangerous and poses a threat to their ability to do their job.”

SDLP leader Colum Eastwood said those behind the graffiti were “cowards” and Ms O’Neill “won’t be intimidated by faceless criminals who are trying to silence her.”

Sinn Féin MLA Martina Anderson condemned those responsible. “Those involved in journalism must be protected and they must be able to do their work free from intimidation, harassment and death threats.”