Government to ‘offer refuge’ to migrants stranded on boat in Mediterranean 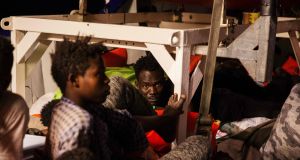 The MV “Lifeline”, now moored off Malta, has 234 migrants who were rescued on June 20th including 14 women and four children younger than three years. Photograph: Felix Weiss/AFP/Getty Images

The Government has said it intended to “offer refuge” to 20-25 migrants stranded on a boat in the Mediterranean that has been refused permission to dock in a number of countries.

The MV Lifeline, which is operated by a German NGO and has 234 migrants on board, has been refused permission to dock in Italy, Malta and Spain and is 30km off the Maltese coast, after it picked up stranded migrants off the Libyan coast.

Government Buildings said that following discussions among Ministers in Dublin, Minister for Foreign Affairs Simon Coveney had been in touch with the Maltese authorities and agreement had been reached that Ireland will be one of a number of EU countries to take the migrants once the Lifeline docks at Malta.

The boat is expected to dock in Malta in the next 48 hours.

A Government spokesman was unable to say if the migrants would be allowed to apply for refugee status in Ireland, or whether they would be granted automatic permission to stay.

Thousands of migrants continue to attempt to make their way to Europe across the Mediterranean, often in small crafts with little hope of making the crossing intact.

The development comes as EU leaders prepare to discuss the divisive issue of migration at their summit in Brussels this week.

Speaking in Luxembourg, Mr Coveney said he had made the offer to Malta on Tuesday evening that Ireland would take 10 per cent of the migrants on the Lifeline.

“I think the Irish public will understand that Ireland should be generous and show solidarity with countries that are struggling to deal with the politics of migration right now in the Mediterranean and I hope other countries will do the same,” he said.