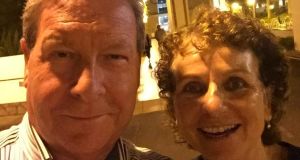 Dr Ian Lindsay and Mary McCarron who are currently stranded in Cusco, Peru.

The Government should initiate a repatriation operation to ensure Irish people stranded abroad due to the coronavirus pandemic can fly home, a doctor stuck in Peru has said.

The retired general practitioner and his wife who live in Dublin are currently stranded in the Peruvian city of Cusco with his sister-in-law and partner. The two couples travelled to Peru at the start of March and Dr Lindsay and his wife Mary McCarron were scheduled to travel on to Buenos Aires in Argentina where their son is currently studying.

They became stranded in Cusco after Peru’s president Martin Vizcarra declared a state of emergency and closed the country’s borders for at least 15 days from March 16th.

The couple received an email on Wednesday from the Irish embassy in Chile saying Avianca airline was considering putting in place a chartered flight from Lima to London with a connecting flight from Cusco. However, the flights are expected to cost about $3,000 - $3,500 (€2,790 -€3,250) for one-way economy class, or $7,500 (€ 6,970) for business class.

On Thursday evening, the embassy sent another email encouraging Irish travellers with flights cancelled by Air France or KLM to contact the airlines as “we are hearing they are planning to run replacement flights in the coming days”.

It also said Irish citizens should submit “expressions of interest” to the British SAGA travel agency who may also be chartering a flight from Lima to the UK.

Dr Lindsay says it’s time for the Irish Government to step in and support its citizens who are abroad at this time of crisis.

The Irish representative in the Chilean embassy is trying to be helpful but “there’s not much they can do,” he says. “The first time I contacted them they said we’ll try and find another way for you to fly out. But they’ve realised how difficult this is. It’s impossible to contact airlines right now.”

“The Irish Government needs to get involved directly. They could organise for Irish people to get to the airport and get the airplane through diplomatic channels. The Germans have got their people out and we’ve heard the Israelis are getting people out. I know there’s cost implications but we need to get home.”

In Cusco, the two couples can only leave the apartment where they are staying to shop for food, use the bank or go the hospital. There is also a curfew in place between 8pm and 5am.

Meanwhile, in Buenos Aires, their son Michael and his three Irish friends, all students from TU Dublin, are hoping to board a flight to Lisbon on Friday evening before flying on to Dublin.

“Things are changing overnight in Argentina so it’s really 50-50 whether he’ll be able to get on that flight. I’ve sort of lost faith in our ability to get out,” Dr Lindsay said.