Over 40% of people wash Christmas turkey despite warning 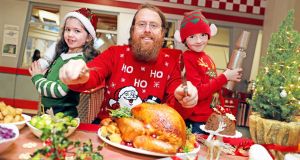 Chef JP McMahon with Matei Balasca (9) and Grace Dalton (5), both from Dublin at the launch of Safefood’s Christmas campaign. Photograph: Julien Behal

As many as one in four Irish cooks will put their health, and the health of their families, on the line on Christmas Day by washing their turkeys before cooking them despite repeated warnings from Ireland’s food safety watchdog.

The turkey remains the most popular centre piece on Irish Christmas dinner tables with more than a million of them set to be cooked on the big day. However Safefood has warned that despite the fowl’s enduring role in the Irish Christmas an alarming number of Irish people have no idea how to handle it.

According to its research published today, 43 per cent of people still wash their turkey prior to cooking it. This actually spreads food poisoning germs around kitchen surfaces and on to ready-to-eat foods.

A further 47 per cent of people say they will cook their turkey this year with the stuffing inside, something which is recommended only if using a fan oven as it can leave parts of the bird insufficiently cooked.

Safefood also found that 58 per cent of people are happy to leave their cooked and partially eaten turkey out of the refrigerator, sometimes overnight, mistakenly thinking it is the safest way to store the food. It isn’t.

Meanwhile 85 per cent of those polled said they fully expected to eat leftover turkey this year with almost one in five saying they would still be eating those leftovers four days or more after Christmas Day, something Safefood said was not advisable.

The research also said that one-quarter of Irish people will be cooking their first ever Christmas dinner this year with a further 17 per cent claiming to be relative novices, having cooked Christmas dinner only once or twice on Christmases past.

When it comes to confidence levels, when preparing the ultimate turkey roast, 22 per cent of those surveyed said they were nervous and just 23 per cent said they would be confident about the task ahead.

“Christmas dinner is a classic that we all love, but there are still misconceptions out there about how to prepare and cook it safely,” said Dr Linda Gordon, the chief specialist in food science at Safefood.

“Whatever cooking method, timings or recipes you use, you know your turkey is properly cooked when there’s no pink meat in the thickest part of the breast and thigh, the juices run clear, and the meat is piping hot throughout.”

She said Christmas leftovers “should be covered and placed in the fridge within two hours of cooking and used within three days. If you’re reheating leftovers, remember to reheat them only once until they’re piping hot.”

Lending his support to the Safefood campaign was chef, restaurateur and food writer JP McMahon.

He said Christmas was “the best time of the year” but pointed out that “the pressure to make equally the best meal of the year is very high” and he advised people not to put themselves “under too much pressure to cook overly complicated recipes”.