Flames spread along slopes on night of April 23rd, coming close to homes and forestry 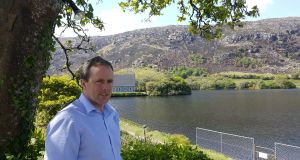 Neil Lucey looks across the lake at Gougane Barra in Co Cork, where a fire engulfed the slopes on April 23rd. “We were lucky we didn’t end up with a Connemara-type event.”

Neil Lucey is in reflective mood as he looks across the lake at Gougane Barra towards the blackened rocky mountainside and recalls how the blaze that engulfed the steep slopes and turned the water red in the flamelight on April 23rd could easily have turned into something far more catastrophic.

“It was extraordinarily dramatic and the photos taken that night captured it well, but it came down the mountainside slowly and although it spread along the mountainside for about 4km, it didn’t reach the forestry, so we were lucky we didn’t end up with a Connemara-type event.”

Neil – who, together with his wife, Katy, runs Cronin’s Hotel at Gougane Barra – has been following the unfolding story at Oughterard closely and he admits that while the scene in the tranquil West Cork retreat on Sunday April 23rd was truly terrifying, the damage two weeks on looks relatively minor.

“It was a mountain fire so a lot of what you see there is rock – there was dried vegetation and dead ferns burned in between the rock slopes, but give it a few weeks and some rain and it should start turning green again, but we were lucky it didn’t spread that night,” he said.

Smoke behind the ridge

According to Neil, the fire began on the Kerry side of the Derrynasaggart Mountains on April 21st and started spreading southwards so that by next day, they could see smoke behind the ridge over Gougane. But it was only on the evening of April 23rd that the fire spread down the slopes.

“It came down the mountainside slowly enough, but we could have ended up with a Connemara-type event only for the fire services getting control of it here. We had units from Macroom and Dunmanway and Bantry and Skibbereen and they did Trojan work battling it through the night.”

Keeping a close eye on the fire that night was local woman Zena Cronin. She had returned from playing cards at Clondrohid Hall some 30km away to discover the hillside behind her isolated farmhouse blazing like something from an apocalyptic disaster movie.

“When I came home just before midnight, the fire was burning the whole length of the ridge – it was the scariest thing, and by night it looked 10 times worse. I didn’t go to bed at all that night – I stayed up watching it, but the Macroom Fire Brigade lads were marvellous.

Ms Cronin pointed out that her late husband, Denis, used to carry out controlled burning of the ferns and other scrub vegetation on a regular basis, but since his death there’s been a build-up of dead vegetation which was “bone dry” and provided ample fuel for the fire.

According to Ms Cronin, none of her son’s sheep were injured as he had brought them all off the mountain for lambing, and the only damage was to some wire fencing used to cordon off dangerous drops on the mountainside. That fencing will have to be replaced.

But fire can be a fickle thing and while it petered out in Gougane on April 24th, that night it threatened to sweep down the nearby Borlin valley which could have opened up great swathes of forestry south towards Kealkill to the risk of fire.

Neil Lucey paid tribute to his neighbours in the Borlin valley. “It was the Borlin boys who stopped it on the Monday night – the bigger event was looming but they did what is called a burn-back where they lit a fire back into the fire to get control of it.

“It was a very stressful night here on the Sunday – the lake turned red from the flames. But nature takes over – the following morning there were four fire brigades in the yard there, but you could hear the birds singing and it was as if they were saying ‘don’t worry, the greenery will come back’.”