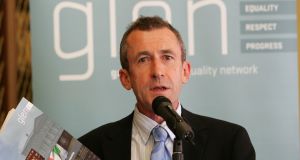 Gay rights activist Kieran Rose resigned from the board of Glen earlier this week after concerns over his unsuccessful Seanad campaign being run from its offices. Photograph: Frank Miller

The Gay and Lesbian Equality Network (Glen) has appointed Senator Jillian van Turnhout to carry out a review of its organisation following controversy over spending there.

Gay rights activist Kieran Rose resigned from the board of Glen earlier this week after concerns over his unsuccessful Seanad campaign being run from its offices.

Mr Rose said he was resigning “with regret” from the board of Glen as the issue was causing a distraction to its work and to other issues under review by the Charities Regulator.

Glen provided “temporary supports” – believed to be office space, printing and photocopying and computers – worth about €11,500 during his campaign for the Seanad last year, which were later repaid, Mr Rose said. At the time, he was co-chair of the organisation.

Controversy ensued after executive director Áine Duggan raised concerns with the board over governance and financial management at the charity.

The Charities Regulator, who was contacted subsequently, directed Glen to provide information including financial reports, details of staff credit cards and the report of an independent auditor.

Ms van Turnhout, who has a wide range of experience of governance at not-for-profit organisations, will begin her work on Monday and is expected to report to the board within six weeks.

Announcing her appointment, the board of Glen said she was widely respected for her independence and integrity. In a statement, it said her work would focus on advising the board on corporate governance and compliance issues. The board has also asked Ms van Turnhout to review compliance with charity regulations and advise on how to ensure compliance.

“She will also advise the board on strategic decisions regarding the future of Glen and will engage with staff, stakeholders and board members before making recommendations on the future direction of the organisation,” the statement said.

“We can think of no better person than Jillian to assist us in identifying the needs of the LGBTI community and signposting the role of Glen in meeting those needs.”

Ms van Turnhout said she was looking forward to working with the organisation. “I hope my work will help ensure that Glen is not only fully compliant with statutory obligations and corporate governance, but also has a strategic vision,” she said.

Separately, the board has engaged an independent financial consultant to review the financial administration of the organisation.