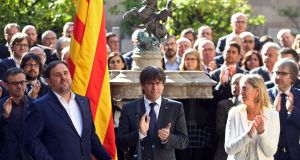 Carles Puigdemont, president of Catalonia, and his vice-president, Oriol Junqueras (left), at a ceremony in Barcelona to make official their commitment to hold a referendum on independence. Photograph: Toni Albir

Catalan nationalist politicians and activists have gathered in Barcelona to back a declaration underlining their commitment to a referendum on independence from Spain, in a bid to counter reports of infighting within the separatist movement.

More than 100 members of the broad pro-independence movement appeared with the Catalan regional premier, Carles Puigdemont, as he announced his intention to push ahead with the plan.

“The Catalan government solemnly reaffirms its determination to prepare, convoke and stage a referendum,” Mr Puigdemont said, speaking in a courtyard of the regional government building.

Mr Puigdemont has repeatedly said the referendum will take place by the beginning of October this year. Although he has said he would like to stage a Scotland-style vote negotiated with the central government, Madrid staunchly opposes the plan, arguing it is unconstitutional.

The declaration of intent was a purely symbolic move that appears to have been aimed at reassuring factions within the independence movement who feared Mr Puigdemont and his centre-right Catalan European Democratic Party (PDECat) might pull out of the referendum plan and hold a regional election instead.

The leaking to a newspaper of a recording of PDECat politician David Bonvehí suggesting his party had an alternative to the referendum project has increased tensions in recent days with the more stridently separatist Catalan Republican Left (ERC), a key party in the secessionist front.

However, ERC leader Oriol Junqueras appeared alongside Mr Puigdemont during Friday’s declaration, saying that the referendum plan “is a commitment with democracy, with our society as a whole”.

Earlier this week, Mr Junqueras had seemed to advocate a unilateral declaration of independence by the northeastern region if the Spanish government manages to thwart the referendum as it has pledged. Several nationalist politicians have been on trial recently for staging an informal, non-binding referendum in 2014, which overwhelmingly favoured independence albeit with a low turnout.

PDECat and ERC ran on a shared ticket in a 2015 Catalan election, which they treated as a plebiscite on independence. With the support of an anti-capitalist party, the Popular Unity Candidacy (CUP), they clinched a majority in the regional parliament, but only 48 per cent of the popular vote.

Recent polls suggest a slight dip in support for independence. A total of 44 per cent of Catalans want to break away from Spain, while 49 per cent oppose such a move, according to a poll published in late March by the Catalan government’s study institute.

Meanwhile, a negotiated increase in the region’s autonomous powers without granting it full independence has consistently shown to be the most popular alternative among Catalans, although the regional government says such a solution is not on the table.

The conservative Popular Party (PP), which governs Spain, played down Friday’s declaration. Xavier García Albiol, the party’s leader in Catalonia, described it as “a little event” and “more of the same”.