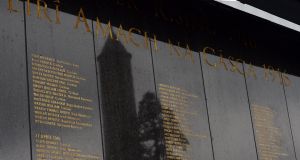 The first word in the Irish name for the Easter Rising is mispelled with the word ‘Éirí’ appearing with the síneadh fada placed incorrectly in the text and reading ‘Eírí’. Photograph: Cyril Byrne/The Irish Times

Glasnevin Cemetery is to correct an error on the “Remembrance Wall” listing the dead of 1916 after misspelling the Irish wording on the monument.

The first word in the Irish name for the Easter Rising is mispelled with the word “Éirí” appearing with the síneadh fada placed incorrectly in the text and reading “Eírí”. A statement issued on behalf of Glasnevin Cemetery said: “There is a misplaced fada in the spelling of the word ‘Éirí’ on the Necrology Wall unveiled yesterday at Glasnevin cemetery.”

“It will be corrected immediately,” it added.

It is understood the work to correct the mistake will be undertaken within 48 hours.

The Glasnevin Trust was recently criticised over the translation of an Irish excerpt of the Pádraig Pearse oration delivered at the graveside of Jeremiah O’Donovan Rossa.

Pearse’s speech, which struck a chord within Irish nationalism when it was delivered in 1915, is re-enacted daily at Glasnevin Cemetery.

The translation has been criticised for not representing what Pearse said and prompted Conradh na Gaeilge 2016 coordinator, Cuan Ó Seireadáin, to write a letter to the Glasnevin Trust calling for the text to be translated in an historically accurate way.