Giants, flags and mannequins gear up Galway for hurling final 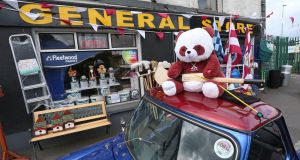 Rooftop support for the Galway hurlers at the general store in Oranmore village outside Galway. Photograph: Joe O’Shaughnessy

They call him Gerry the Giant, and he’s a carstopper on the morning ratrun through Keeraun on Galway’s western rim.

At almost four metres (over 12 ft) high, he could be a wanderer from a Macnas street theatre workshop.

In fact, he is an artistic endeavour by enthusiastic members of Rahoon/Newcastle GAA club in the lead-up to Sunday’s All Ireland senior and minor hurling finals.

Togged out in maroon and white, this is a giant of steel – like his county teams – with features made of chicken wire. It took several expeditions to city shops to find enough bedsheets to clothe him, and heavy rain has already taken its toll on his garments.

“Senior player John Hanbury is from our club and lives up the road in Mincloon, and so one of the neighbours rang me and asked me if I would make something,” Keith O’Halloran explained.

O’Halloran, a fitter by trade and 24 on Friday, roped in his brother Andrew, girlfriend Michelle Kelly, and friend Paul Kavanagh, and they took to his home garage over a period of three days. He and Andrew have played for Rahoon/Newcastle, as have two generations of his family before him.

“We knew it had to be a big lad, because of the size of this senior team,” O’Halloran says. Gerry’s hurl was made by Robert O’Neill and Robert Keane, and a little sign denotes the giant’s title and surrogate parents.

Close by on the same narrow road, an equally giant piece of granite has been draped in the county flag. Twelve years ago, when Galway was in one of a series of All-Ireland finals, Eoin “Boggy” Coyne scaled the rock to pin it up.

“At the time, Tony Óg Regan from our club was on the 2005 senior team going to Croke Park, and he lives in Boleybeg and was passing that stone every day,” says Coyne, a plumber from Keeraun.

“Have I a ticket ?” Coyne laughs at the idea. “Do you have one for me?” Not only is it 29 years since Galway last won, but Waterford’s “wilderness” period dates back to 1959. That means a lot of fans desperate for tickets.

Around the corner, Gerry the Giant’s younger brother, a mannequin, stands proud on the front wall of Catherine Keane-Murphy’s garden.

“I’ve six brothers, five of whom are involved with Rahoon/Newcastle, and two hurling and camogie-mad kids, and a husband who trains the under 10 players,” Ms Keane-Murphy said.

A founder of Naíonra Cháit in Boleybeg, she set up camogie training in the past two years.

“My daughter’s schoolfriend helped us out, as her dad used to have a shop and had a mannequin in his back garden,” she says. “He dropped it over to us in two parts – like a body coming across the wall! I borrowed an old team jersey from my brother to fit him out.”

The dummy hurler has already been attracting attention, she says. A Spanish runner stopped to photograph it with his phone, and she and her husband were woken by an early morning car engine a few days ago.

“We thought someone might be trying to take it, but then we looked out and it was two lads who had stopped to take a selfie with it for a laugh!”

The Keane-Murphy clan has travelled to every single match the Galway senior team has played this season, but as of Thursday they had just one ticket for Sunday’s final.

“It’s unfortunate when you hear of these corporate sponsor tickets going out, and club members find it so hard, but we are thinking positively and hoping something will turn up,” she said.

The thousands without tickets are expected in Galway’s Eyre Square from 1pm on Sunday to watch the minors, followed by the seniors, on a big screen.

A minute’s applause has been organised by fans in the sixth minute of the senior final as a tribute to former county star Tony Keady, who died suddenly in August, and who secured All-Ireland medals for his county back in 1987 and that halcyon year of 1988.