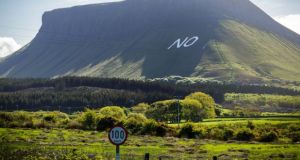 The toil is long: One of those involved in erecting the slogan said it was a “mammoth task”. 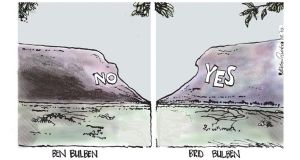 A giant “No” slogan arranged in the early hours of Thursday on the side of Ben Bulben in Co Sligo has been taken down.

The word was erected in 160ft letters using plastic cladding by anti-abortion campaigners in support of a No vote in the upcoming referendum on the Eighth Amendment.

A spokesman for the county council confirmed that the sign had been dismantled, though the work had not been carried out by council staff. The council received a number of complaints about the slogan, he said.

They were trying to warn us pic.twitter.com/r0TTyqNH5m

The erection of the sign prompted a number of people to create mock images online and in print, proposing alternative messages for the mountainside. Artist Fuchsia MacAree used the “No” to turn Ben Bulben into a “volcano”, while Yes advocate Darren Purcell transformed the slogan to read “No advice from me I’m a mountain”.

The National Parks and Wildlife Service had called for the removal of the sign saying the installation of “alien materials such as this onto a special area of conservation is insensitive to its conservation status and incompatible with the habitat”.

“The owners should procure its immediate removal so that Ben Bulben is returned undamaged to its natural and beloved state,” it said on Thursday

Tommy Banks, one of those involved in erecting the slogan, on Thursday said about 20 people involved in the operation had been on the mountain from 4am that day, carrying out what he described as a “mammoth task”.

Mr Banks said they had permission from all the land owners and had been helped by “men of all ages, and women as well, down making tea and sandwiches”.