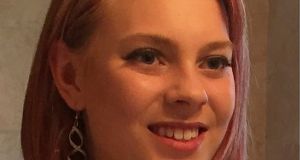 Gardaí believe schoolgirl Anastasia “Ana” Kriegel was beaten to death last Monday in a derelict farm building in west Dublin where her body was found yesterday.

The 14-year-old’s remains were discovered during a search effort less than 1km from St Catherine’s Park in Lucan, where she was last seen alive at about 5.30pm on Monday.

While she had been the subject of a missing person’s inquiry for three days, detectives now believe she was murdered shortly after she was last seen.

The teenager was naked when found and a possible sexual motive for her murder is being explored.

Inquiries are now examining her last-known movements and specifically who she was with. She had been with at least two male friends in the park but they have said they went home and did not know where she went afterwards.

“Talking to parishioners in my parish of Confey, there is a very definitely a palpable sense of shock, numbness and sadness in the heart of our community.

“People feel helpless in the face of this awful tragedy. The sense of loss is deep and inexplicable. We are keeping the family in our thoughts and our prayers.

“The feeling in the community is just one immense shock and horror at such an awful tragedy.”

A first-year student at Confey Community College in Leixlip, Co Kildare, Ana, who was adopted from Russia when she was two by an Irish-French couple, was very popular in her peer group, say gardaí. She had recently run a Snapchat video log of a school sports day and an examination of her social media activity now forms part of the Garda inquiry.

Sources said while she had been prone to depression, she had been very happy of late and was enjoying secondary school.

State Pathologist Prof Marie Cassidy was to carry out a preliminary examination on Ana’s body at the scene last evening. Gardaí said it was only when a full postmortem had been carried out that the cause of death would be confirmed and the suspicious death inquiry would be upgraded to murder.

However, Garda sources believe Ana was beaten to death.

Supt John Gordon, of Lucan Garda station, requested privacy for the family, who he said were distraught and had a younger child they wanted to protect.

He said Anna’s family had reported her missing at about 8pm on Monday, just three hours after she left their home at Newtown Park, Leixlip, and failed to return.

Supt Gordon appealed to anyone who had known Ana or had seen her around St Catherine’s Park on Monday to come forward.

“She was a particularly striking girl, quite tall for her age and very well known in the locality because of that,” Supt Gordon said.

Asked were there concerns for other people in the Lucan area because of the violent nature of the crime, Supt Gordon said he would always advise people to be careful.

Confey Community College  is set to open on Saturday so students and their parents can gather and come to terms with their grief. The school opened as usual on Friday with the school assuring parents via text messages that their children were being “minded”.

“Parents, students are being minded in school today by their teachers,” the school message to all parents said today.

“Teachers have organised to be in school tomorrow from 11am to 1pm to support students this difficult time. We will open an area for parents as well.”

1 Clontarf tenant says her garden was ‘destroyed’ without warning by Irish Rail
2 Fianna Fáil election candidate was disqualified from being company director
3 RTÉ receives complaint from union after ‘issue’ with spokeswoman’s accent
4 Election 2020: Fine Gael and Fianna Fáil set to reveal spending plans worth billions
5 How to get through the health insurance maze
Real news has value SUBSCRIBE