Ghosts of past crisis hover over last-ditch Stormont talks

Analysis: Peter Robinson’s warning of losing Executive for a decade not without precedent 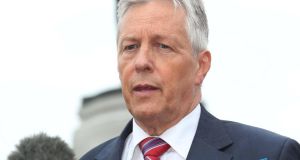 On Tuesday evening Peter Robinson was warning if the Stormont House talks, mark two, failed, Stormont could be down for a decade. By Wednesday evening his foreboding was ratcheted up a few levels.

There was a sound precedent for his warning. In 2002 the Northern Executive and Assembly were put on ice following Stormontgate in October that year, when it was alleged the Provisional IRA was operating a spy ring at Stormont.

It took almost five years before it was reactivated in May 2007, after Ian Paisley and Gerry Adams did that famous photoshoot in March of that year.

Now, we’re in similar desperate territory. The Northern Executive and Assembly haven’t gone wallop yet, but as one senior DUP source said on Wednesday morning, “It appears we’re heading for the rocks.” If this ship hits the reefs then it could indeed be many years before it is salvaged.

Prospects aren’t good, but the governments believe it is worth trying to see if the vessel can be steered into safer waters.

The parallels with Stormontgate run deep. In 2002 Sinn Féin’s Assembly administrator Denis Donaldson – subsequently exposed as a British agent and later again murdered in Co Donegal – and two other republicans were arrested in connection with the alleged spy ring.

The charges against them were dropped in December 2005, but as far as the Executive and Assembly were concerned that was academic: Stormont was long crashed by then, the damage well done.

That’s what happened in 2002, and that’s what could happen in 2015. In relation to McGuigan’s murder, people will be charged only if police believe they have evidence. But a different court is operating here: the court of public and political opinion, and, most particularly, unionist political and public opinion. That’s also what happened 13 years ago.

The republican pedigree of Storey, Gillen and Copeland will only reinforce unionist suspicions that a link remains between the IRA and Sinn Féin. In the past, both Storey and Gillen have been named under House of Commons parliamentary privilege as senior IRA figures. Copeland is a well-known north Belfast republican, who has survived assassination attacks by loyalist paramilitaries and was wounded attending the wake house of Shankill bomber Thomas Begley.

The fact Gillen and Copeland were quickly on the scene when Gerard “Jock” Davison was murdered in Belfast in May to offer their support to his family, and the fact Storey was one of the pallbearers at his funeral, again isn’t evidence of any wrongdoing, but their arrests will certainly colour unionist perceptions of them, the IRA and Sinn Féin.

Always the strategist, Robinson made another push to safeguard the institutions on Wednesday by demanding the adjournment or suspension of the Assembly to allow the talks to continue with full concentration.

But Robinson can only stretch so far; he needs help and reassurance from Sinn Féin. Last night there was no sign of such aid. McGuinness said he would oppose the adjournment and boasted his party was not afraid of facing elections if Stormont collapsed. UUP leader Mike Nesbitt also indicated he would resist any attempt by the Assembly business committee to carry a motion for adjournment.

If the adjournment attempt fails, Northern Secretary Theresa Villiers could introduce emergency British legislation to suspend Stormont altogether, pending the outcome of the talks. That would trigger an almighty row between Dublin and London and the DUP’s sense of it last night was that Villiers would resist such a move.

Last night it was down to whether the SDLP might for once break ranks with Sinn Féin and support the adjournment motion or abstain in the business committee vote.

Either position would mean the DUP and Alliance members of the committee could carry the motion. While the future of the Executive and Assembly remains perilous, that at least would buy some time.

Suggestions late on Wednesday were that the SDLP would oppose the adjournment on Thursday. However, Taoiseach Enda Kenny is on Thursday trying to change the party’s mind because, as a Government soure said: “Adjournment is the wise course of action.”