George Redmond’s death marks the end of an era 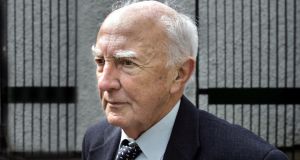 The death of former planning official George Redmond marks the end of an era for a certain kind of Ireland.

Mr Redmond, who died aged 92 in a Dublin hospital on Tuesday night, was the most powerful figure in local government in the capital for much of his 40-year career in Dublin Corporation.

The friend of many of the leading builders and developers in the 1960s and 70s, he received vast sums of money in return for providing advice.

By the 1990s, these activities were under investigation by the Planning tribunal and the Criminal Assets Bureau.

He was arrested at Dublin airport with €380,000 in cash and cheques on returning from the Isle of Man.

This forced a settlement of almost €1 million with the Revenue Commissioners.

Tribunal sittings in Dublin Castle heard evidence about the wads of cash he stashed in the bathroom and kitchen of his house, and his multiple bank accounts opened under various names.

The tribunal branded him corrupt in a report published in 2004. Separately, criminal charges were brought against him and he was jailed for 12 months at the age of 79.

Then, though broke and broken and in his eighties, his luck changed. The charges were quashed and he was released from jail.

A second prosecution got nowhere.

Other legal proceedings uncovered the fact that the tribunal had withheld vital material.

Mr Redmond seized the opportunity and had the findings against him overturned. At 90, after years under investigation, he was vindicated.