George Redmond among most corrupt officials in Irish history 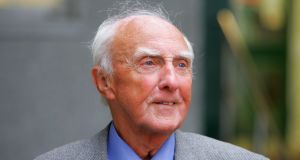 Arrested by members of the Criminal Assets Bureau at Dublin Airport after flying in from the Isle of Man with a bag containing £300,000 in cash and bank drafts. Photograph: The Irish Times

I’ll never forget the time I saw George Redmond positively glowing. It was on a cold, wet day in the month of January during the grim 1980s, and he was sitting beside Ray Burke, then chairman of Dublin County Council, on the podium of its makeshift council chamber on Upper O’Connell Street.

What distinguished Redmond from everyone else in the room was his deep suntan, acquired on a post-Christmas holiday in Spain, which some of us assumed had been paid for by one of the big builders with an interest in developing land in the county. Certainly, I believed he was “on the take”.

There is a long-established tradition in Ireland of not speaking ill of the dead. But I would make an exception in George Redmond’s case because he used his position to subvert “proper planning and development”, for the benefit of builder clients who were prepared to pay him for his “advice”.

Redmond was one of the senior local authority officials I had interviewed for a series of articles in 1979 called “Dublin: What went wrong?”. At the time, he was in charge of the city planning department, yet it was clear to me he had an ill-disguised contempt for Dublin’s architectural heritage.

I pressed him about Dublin Corporation’s devastating road-widening plans, which would have levelled most of the Liffey quays and numerous historic streets. But he was among those who clung to the belief that Dublin’s streets were designed for a bygone era and needed to make way for “progress”.

When Dublin Tourism approached Redmond with a proposal to purchase Malahide Castle, he was worried about what it might cost to maintain. “How old is this castle?” he asked. On being told parts of it dated from the 12th century, he exclaimed: “You’re talking about an open chequebook situation!”

Shortly before Redmond retired as de facto county manager in 1989, he suggested to me that the two of us should do a “tour” of all of these places and I would write about it for The Irish Times, as a kind of valedictory for his career. I declined, because it would have amounted to greenwashing.

By then, of course, Dublin County Council had become “the estate agency that represents us”, as Nuala O’Faoláin wrote in one of her opinion columns. Week after week, land that was never intended for development was being rezoned at the behest of its owners, contrary to professional planning advice.

Redmond was never a “planner” as such, merely an official who had started out in 1941 as a clerk straight from St Joseph’s CBS, Marino, and rose up through the ranks until he became assistant city and county manager, with delegated powers to run the area administered by the county council.

Apart from being a narrow-minded bureaucrat, devoid of any vision, his meanness was legendary. He ate lunch in the canteen of the council’s office block and often got others to pay for it. And all the while, as we have since discovered, he was squirrelling away hundreds of thousands of pounds in cash.

I was told by one official, sotto voce, that Redmond worked closely with the spectacularly corrupt Liam Lawlor, principal mover-and-shaker on the council in relation to land rezoning in the county. Lawlor was later named as “Mr Big” by one-time lobbyist Frank Dunlop in evidence to the planning tribunal.

It was Lawlor who introduced Tom Gilmartin to Redmond in 1988 when the Co Sligo-born developer, based in Luton, was trying to acquire land owned by Dublin Corporation at Quarryvale for what is now Liffey Valley shopping centre.

As recounted by the tribunal’s final report, this meeting took place in Redmond’s office, where he plucked a map of the Quarryvale area from a drawer in his desk, colour-coded to show the different ownerships. He then stepped out to “take a phone call”, leaving Gilmartin and Lawlor alone together.

It was then that Lawlor told him he would have to pay him £100,000 and would also have to pay money to Redmond. “If you’re going to go anywhere . . . you have to take care of George [and] you have to have me on board,” Lawlor said, according to Gilmartin.

A complicating factor was that Redmond had a close relationship with John Corcoran, then head of Green Property Company, which had its own plans to develop the Blanchardstown shopping centre, and Corcoran correctly identified Gilmartin’s plan as a major competitive threat to it.

I had heard on the grapevine Redmond had been promised a management role in Blanchardstown after retiring from the public service. But all he could do to assuage Corcoran’s fears was to ensure the sale of the corporation’s 69 acres at Quarryvale went to public tender.

In the end, Corcoran’s bid for the Quarryvale land – with the intention of squashing Gilmartin’s plans – was trumped by the Luton-based developer’s offer of £5.1 million. Gilmartin later joined forces with Cork-based developer Owen O’Callaghan, but then found himself frozen out of the scheme he had conceived.

The tribunal also dealt with a Garda investigation of planning corruption, on foot of a series of articles in The Irish Times in 1989. It said this investigation, which inexplicably exonerated Lawlor and Redmond, was far from thorough, and its conclusions were “unwarranted”.

Incredibly, Supt Brendan Burns, who headed the Garda investigation, did not interview Lawlor – a lapse the tribunal believed was due to his “position as a TD”. And although Redmond was interviewed about a minor matter, he was not questioned about Quarryvale.

Although loath to spend money, Redmond looked after his own with the fortune he accumulated over the years. Although his gross salary was less than £30,000, he was able to help out his son, a Dublin-based solicitor, in acquiring a grand house in Dublin 6 by putting up a share of the purchase price.

The real truth about Redmond was dramatically underlined in March 1999 when he was arrested by members of the Criminal Assets Bureau at Dublin Airport after flying in from the Isle of Man with a bag containing £300,000 in cash and bank drafts. It also emerged he had up to 20 bank accounts.

More ignominiously, Redmond was convicted of corruption in 2003 and sentenced to a year in jail, although this was overturned on appeal after six months. He was retried in 2008 on two charges, but the jury failed to reach a verdict on the first and he was acquitted on the second.

The planning tribunal had to withdraw its findings against Redmond due to a technical legal flaw in the way it conducted its business. This allowed him to claim he had been “vindicated”. But I stand by the record, which indicates that he was one of the most corrupt public officials in Irish history.