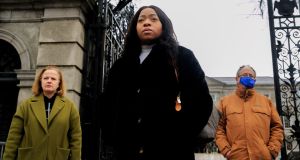 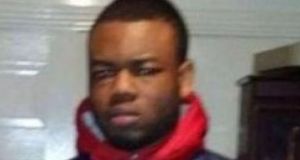 George Nkencho who was fatally shot by Gardaí in the Manorfields area of Clonee, Dublin on December 30th, 2020.

George Nkencho, who was shot dead by gardaí in December, “needed help, not bullets”, his sister Gloria Nkencho has said, adding she believed class was a factor in his being shot dead rather than race.

She insisted only a small minority of people were trying to create division on race grounds arising from her brother’s death.

And she urged people not to be influenced by that “small percentage in society trying to turn this into a major race thing, and trying to cause a war” involving “black against white”.

Ms Nkencho and her family on Thursday expressed serious concern about the Garda Síochána Ombudsman Commission (Gsoc) investigation into her brother’s shooting dead in Clonee, Co Dublin, on December 30th.

The family was now calling for a full independent inquiry. On Thursday a submission by the Solidarity Party, outlining its concerns and the Nkencho family’s concerns, was presented to Minister for Justice Helen McEntee. The calls for an independent inquiry have been echoed by Solidarity, which described the fatal shooting as a “failure” in policing.

Ms Nkencho said if a full public inquiry was held into the shooting a “greater picture of what happened on that day” would emerge. She also believed the Gsoc inquiry was unfolding in a very slow manner, to the extent the inquiry had been undermined.

In their submission to Ms McEntee calling for a public inquiry, the family have said they were not interviewed by Gsoc for 28 days after the killing, despite some being inside the family home when the dead man was shot on the doorstep.

They also say the person who recorded a video of the shooting had still not been identified and that not all of the bullet casings from the rounds fired had been accounted for. They were concerned about the results of an independent postmortem which they said showed Mr Nkencho had been shot in the back.

The family also claimed they have not been kept informed about progress in the investigation and they questioned if an armed Garda member on duty at the scene on the day was being investigated about another, unspecified, matter.

Ms Nkencho said she never thought she would be standing out in public having to address issues around the fatal shooting of her brother, adding it had “caused a vacuum” and “unimaginable pain” she would “not wish on anyone”.

Speaking outside Dáil Éireann on Thursday, she said her mother had described the death of her son as “a wound that can never heal”.

“This shouldn’t have happened; George did not deserve to die. He needed help, not bullets. My brother was a person, not an animal,” she said.

“He is not here to speak for himself so we must. We need a full public, independent investigation into his death. We need truth and we need justice. We need the public to come together and demand what is right. This is not a time for us to be divided. A life was taken. A life that matter and meant something.”

Asked by The Irish Times if she believed her brother’s race was a factor in his being shot dead by armed gardaí, Ms Nkencho said she believed class was more likely a bigger factor.

In reply to queries, Ms McEntee expressed her “sympathies to the Nkencho family and all involved in the tragic incident in Hartstown”. Her reply added “an independent Gsoc investigation is underway, and it is important that it is allowed complete its work”.

A comment from Gsoc provided to The Irish Times said: “The question of a ‘public investigation’, or a commission of inquiry as has been mentioned in the past, is one for the Government.

“Statements have been taken from witnesses, including family members, and other evidence has been gathered. The investigation is ongoing and further statements and other investigative actions will be taken.

“GSOC investigations are overseen by the three members of the Commission who are appointed by the President. The Commission will satisfy itself that all of the State’s obligations under Article 2 of the European Convention on Human Rights, which include that a death following police contact be independently investigated, will be honoured in this investigation.

Meanwhile, Ms Coppinger echoed Ms Nkencho’s concerns about class, but said the conversation around race had been “a big issue” in Dublin 15, where the dead man was shot.

“This would only happen to people whose lives are less valued, in my opinion,” Ms Coppinger said, adding such a death could happen to a Traveller, a working class person or a member of a “minority community like the black community”.

“This would not happen to wealthy, middle class, 27-year-old student in Killiney. And if it did, the TDs inside would screaming and shouting. Instead, in Dublin West, they’ve gone into hiding.”

Mr Nkencho was shot dead in the front garden of his family’s home after a dispute during which he was armed with a knife. He was shot a number of times by the Garda Armed Support Unit after he appeared to lunge at gardaí with the weapon in the aftermath of an alleged assault by him at a nearby shop.

The shooting followed a lengthy interaction between Mr Nkencho and gardaí, during which Tasers and pepper spray were used in a bid to subdue him, the Garda said. The dead man’s family has said he was suffering from mental health issues.