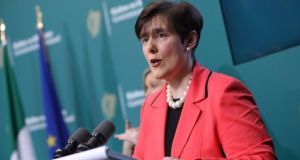 Minister for Education Norma Foley will come under increasing pressure from the Opposition in the Dáil this week to abandon the written Leaving Certificate examinations.

On Tuesday, Labour and the Social Democrats separately called on Ms Foley to introduce calculated grades for 2021 and urged her to make an early decision on the matter.

Labour’s education spokesman Aodhán Ó Ríordáin said the news of the roadmap to reopen schools for students with special needs was welcome.

He called on Ms Foley to “end the agony” and make an early decision for students who still do not know of the return date to school, or if their examinations are going ahead or not.

He said it was now unlikely that practicals and orals would take place and that it was his party’s view that students be offered a choice of calculated grades, or to take a written examination at a later date.

He said the Minister had announced a review of last year’s experience with the Leaving Certificate last October. “My understanding is nothing has happened… Now we are faced with making a decision with no information, with none of that review having taking place and having no lessons learned.”

Asked at a media event, why Labour was making the call now when of the three teaching unions, the Teachers Union of Ireland, was still saying that practical, and written, examinations could still take place Mr Ó Ríordáin said partnership and engagement were both very important.

“However, politics is about making decisions,” he said.

He said the decision on the Leaving Certificate last year was taken on the basis of 130 cases a day. “We are now at 1,300 and hoping against hope that we get down to 130 a day,” he said.

The Social Democrats Gary Gannon also said that it was very important for the 61,000 students that a decision was taken this week and his party supported calculated grades.

He accepted that there would be difficulties as this year’s crop of students missed most of last year and have not had examinations or mocks.

“There will be problems but it is the best of bad options,” said Mr Gannon.