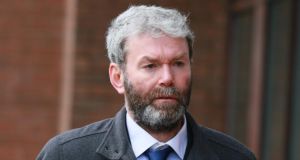 Garda whistleblower John Wilson has called for a “rational, mature” debate on legalising cannabis in Ireland, given its widespread use.

“If the psychoactive compound which causes schizophrenia could be removed from the substance, it could be legalised, regulated and could be less harmful than tobacco,” Mr Wilson said in advance of next week’s referendum on the issue by students at NUI Galway (NUIG).

Regulation of cannabis without this compound could ensure that thousands of people currently using the substance avoided criminal conviction, he said.

It could also provide another income stream for Government, he suggested.

The State’s anti-drugs policy had been an “abject failure” , and it was time to differentiate between cannabis and class A drugs, he said.

“I have seen the misery caused by heroin,but I also know that if tobacco was discovered today it would probably be banned due to its harmful effects,”he said.

“That’s why I give 100 per cent support to Minister for Children Dr James Reilly in his efforts to introduce plain packaging for tobacco,”he said.

Mr Wilson said prohibition never worked, and there was an “hypocrisy” which extended to the State’s approach to alcohol.

The ban on below cost selling of alcohol initiated by Minister for Health Le Varadkar was a “great day for the smugglers”, and politicians hadn’t the guts to take on the alcohol industry over sponsorship of support, he said.

Mr Wilson and North and West MEP Luke “Ming” Flanagan were guests at a public talk on the issue hosted by NUI Galway Students for Sensible Drug Policy Society on Friday.

That society, along with NUIG Sinn Féin Cumann, the NUIG Misneach Society and the NUIG Socialist Society have united to call for a “yes” vote, which would mandate the students’ union to support the legalisation of cannabis.

Ciarán Maher of the NUIG Students for Sensible Drug Policy Society said that “any society that claims to be one that values personal liberty should leave adults free to consume cannabis if they so wish”.

The vote is due to be held on Thursday, March 5th.