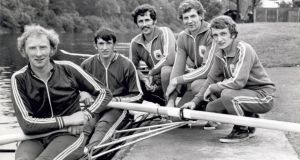 When the members of the Garda coxed fours rowing team who represented Ireland in the Montreal Olympics in 1976 reunite at the Garda Boat Club at Islandbridge on Friday night, it will not seem like 40 years ago.

Christy O’Brien, Willie Ryan, Mick Ryan, Jim Muldoon and cox Liam Redmond headed for Montreal full of confidence after a superb season in Europe where they beat some of the continent’s top crews. But for a stroke of misfortune in the semi-final they could have come home with a medal.

Willie Ryan, a native of Darrara, near Clonakilty, west Cork, recalled the omens were good after they beat the West Germans, who were World Champions, at the West German Open Championship in Duisburg, and followed it up with wins over France and Yugoslavia in Switzerland.

“We led early in the race, caught a small crab at 500 metres but we recovered and we led from the Russians for a good bit. But coming up to the 1,750-metre mark we were neck and neck with the Czechs for second when we caught another crab that almost turned us sideways,” he said.

“The West Germans cruised by us to take third spot and we finished fourth and missed out on a place in the grand final – I suppose an indication of the standard of the race was the fact that even with our mishap, we still finished inside the old world record time.”

In the final, the Russians took gold ahead of the East Germans with the West Germans, whom the Garda crew had beaten in Duisburg, taking bronze. Ryan’s teammate Christy O’Brien from Araglin in north Cork reckoned they could have won a medal if they had made the final.

In the event Ireland won the petite final – now known as the B final – comfortably enough with more than two seconds to spare over Poland with France, the Netherlands, the US and Italy all left trailing in their wake as they effectively took seventh place in the Olympics.

Ryan and O’Brien will be joined by team mates Jim Muldoon from Portumna, Co Galway, and Mick Ryan from Kilmihil, Co Clare. Although cox Liam Redmond is unable to make the reunion, spare man Frank Moore – who carried the Irish flag at the opening ceremony in Montreal – will attend.

“It’s nice to mark the occasion,” said Willie. “We all live around Dublin so we are in touch. Montreal was fabulous – it’s hard to believe it’s 40 years ago. It was great to represent your country and something we all remember with great pride.”