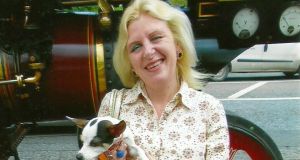 Tina Satchwell: has been missing from her home on Grattan Street in Youghal since March 20th, 2017. Photograph: Irish Examiner

Gardaí investigating the disappearance of a Cork woman missing from her home in Youghal for almost a year are to carry out a search of a wooded area in east Cork on Monday after receiving new information.

Gardaí had planned to begin searching Castlemartyr Wood between Midleton and Youghal for Tina Satchwell (45) on Friday but were forced to abandon their plans when Storm Emma hit the country and covered the 200-acre-plus forest in snow.

The investigation team under Supt Colm Noonan is due to hold a press briefing in Midleton Garda station on Monday. It is understood the search was prompted by the receipt in the past month or so of information which they believe may be relevant to their investigation.

Ms Satchwell has been missing from her home on Grattan Street in Youghal since March 20th, 2017, when her husband Richard returned from a shopping trip to Dungarvan and found she had left the house. He reported her missing four days later.

Mr Satchwell said in a number of media interviews he waited a few days before reporting his wife’s disappearance as he thought she may have needed to “get her head straight” after what he said were several months of anxiety.

Now gardaí are to begin a search of Castlemartyr Wood, which is owned by Coillte. Preparations for the search have been ongoing for the past month and teams have been advised it may last up to two weeks.

This latest search will be the second major search by gardaí for Ms Satchwell and follows a search by divers from the Garda Water Unit of an area off the Youghal quays and a search of scrubland near Golf Links Road in the town last August which failed to find any trace of the missing woman.

Privately, gardaí admit to being perplexed by the disappearance of Ms Satchwell as she has no history of going missing. They describe her disappearance as “out of character” for a woman devoted to her two dogs and a parrot.

Ms Satchwell, who left her mobile phone at her house, did not have a passport but gardaí have checked ferry ports and airports to see if she may have travelled to the UK where she first met Mr Satchwell when she lived in Leicester 26 years ago but they have found no sighting of her anywhere.