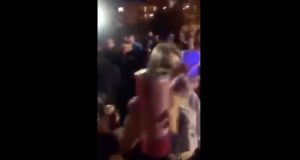 A screengrab from a video on social media showing the crowd at the event at the Oliver Bond flat complex in Dublin over the weekend.

Taoiseach Micheál Martin says gardaí are investigating the organisation of a rave in a Dublin flats complex where a large crowd gathered on Saturday night.

Mr Martin said it appeared the message around the Covid-19 restrictions was not getting through to some people and they were still congregating in large groups.

There will have to be different messaging for different contexts, he said. He said giving gardaí more powers to enforce the rules was a difficult decision.

The current approach was for gardaí to encourage compliance by engaging with people and he said enforcement was a last resort.

Mr Martin said the incident at the Oliver Bond flat complex was being investigated by the gardaí, and he said there might be a range of issues above and beyond social distancing and the breach of regulations in relation to public health, he told Newstalk’s Pat Kenny show.

The organisation of a the rave in a Dublin flats complex is to be raised with both Garda Commissioner Drew Harris and the city’s joint policing committee due to concerns it was a serious breach of Covid-19 restrictions.

The event at the Oliver Bond Street complex on Saturday night was eventually dispersed by gardaí who maintained a presence but said no breaches of regulations were detected.

They are now attempting to identify the organisers.

Dublin City Council has also said anyone involved could be deemed to be in breach of their tenancy agreement if they live in the complex.

A maximum of 15 people are allowed to meet outdoors during Level 3 restrictions in the capital. More than 100 people were said to have attended the weekend rave which was held in a small football pitch in the centre of the complex.

The area also has one of the highest incident rates of Covid-19 in Ireland.

On Monday, political representatives in the area who fielded calls from angered residents called for a ramped up Garda response.

He said it was also an issue for Dublin City Council and that it would form part of a forthcoming meeting of the city’s joint policing committee.

“This is an estate management issue. They [the council] have completely collapsed in terms of their estate management,” he said, adding that Covid-19 spread was a “huge concern” to residents.

The local authority has now written to residents of the complex “advising them” of the guidelines.

“Unfortunately there were a number of complaints received about breaches of Covid-19 Public Health Guidelines in the complex in relation to late night noise, partying and congregating without social distancing in the main courtyard area of the complex.”

It said any information received identifying the “culprits” would be referred to gardaí and could be treated as a breach of their tenancy agreement which could lead to repossession of their dwelling.

Sinn Féin TD Aengus Ó Snodaigh said some in the vicinity had been left in a state of panic due to the health threat.

“Residents aren’t just going to ring the guards at the drop of a hat,” he said of the perceived danger of the gathering.

Mr Ó Snodaigh is to raise the issue with Commissioner Harris and with the local Garda superintendent.

He said the issue was a concern in terms of both public health and anti-social behaviour - in the latter case, open drug use and people using the stairwells of flats as toilets was of particular concern.

Gardaí have said they are investigating the incident to identify the organisers but not potential breaches of public health regulations by those who attended.

They have highlighted recent temporary restrictions which state a person shall not organise such social events.

“Gardaí are not investigating breaches of Public Health Regulations by those in attendance. Social distancing, wearing of masks in public area and other such guidelines are non-penal regulations,” it said.

It explained that officers continue to use a graduated approach based on a tradition of “policing by consent” which will use education and engagement with the community before enforcement.

The Dublin southwest inner city local electoral district, which includes the Oliver Bond Street flats, has one of the highest rates of Covid-19 in the country.

According to the Health Surveillance Protection Centre, the electoral district had 69 confirmed cases of Covid-19 between September 1st and 14th.

It had a rate of 163 cases per 100,000 of population for that time period, three times the average for the rest of the State.